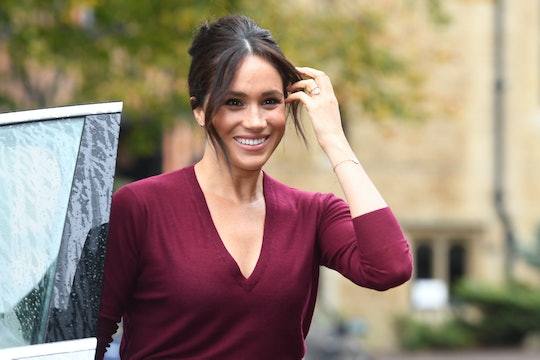 If you didn't get a chance to see Meghan Markle in the recent ITV documentary Harry & Meghan: An African Journey, you are missing out. The former American actress, who has spent so much of the past two years suffering in silence as British tabloids launch daily (if not hourly) attacks finally let her guard down. For a moment, as she was interviewed by ITV reporter Tom Bradby, royal fans caught a glimpse of how difficult it has truly been for her. It was a moment of vulnerability and courage. And some people are speaking out about it. In fact, Meghan Markle got support from female British politicians in a recent open letter of solidarity, and this is truly feminism at its very best.

Markle has unfortunately become a regular mark for the British tabloids since her arrival in the United Kingdom ahead of her wedding to Prince Harry, and in recent weeks she has made it clear that she's had enough. She launched a lawsuit against the publisher of The Mail On Sunday for allegedly publishing a private letter she wrote to her father Thomas Markle, while her husband launched lawsuits against The Sun and The Daily Mirror for an alleged phone hacking scandal, according to Vox.

While Markle's lawsuit has drawn criticism from some British people, an entire group of female British politicians across all party lines have come forward to stand behind her in an almost unprecedented show of solidarity.

Member of Parliament Holly Lynch shared the open letter to Twitter on Tuesday, which she co-signed with more than 70 fellow female politicians. The letter read in part: "As women MPs of political persuasions, we wanted to take a stand with you in solidarity against the often distasteful and misleading nature of the stories printed in our national newspapers concerning you, your character, and your family. On occasions, stories and headlines have represented an invasion of your privacy and have sought to cast aspersions about your character, without any good reason as far as we can see."

The letter went on to call out what these politicians considered "outdated, colonial undertones" in media coverage of the Duchess of Sussex, according to the BBC. The women also noted that they understood all too well what it was like to suffer "the abuse and humiliation which is now so often used as a means of disparaging women" who are in the public eye.

Markle herself addressed her ill treatment by the British tabloids in her interview with Bradby, admitting that she was warned off marrying Prince Harry by friends who said the British media would "ruin her life."

While Markle has not spoken yet about the heartwarming letter from these politicians, it must serve as something of a balm to her. Regardless of her status as a member of the royal family, she is also a new mother and new wife trying to live in a new country with a whole new set of rules. It's not exactly a stretch to imagine that she feels isolated, alone, and vilified by the people in her new county. How wonderful it must feel, then, for Markle to read these words from so many British female politicians: "We will use the means at our disposal to ensure that our press accept your right to privacy and show respect, and that their stories reflect the truth."

This is the sort of welcome to her new country Meghan Markle deserves. I hope she reads it over and over and smiles. She is not alone.