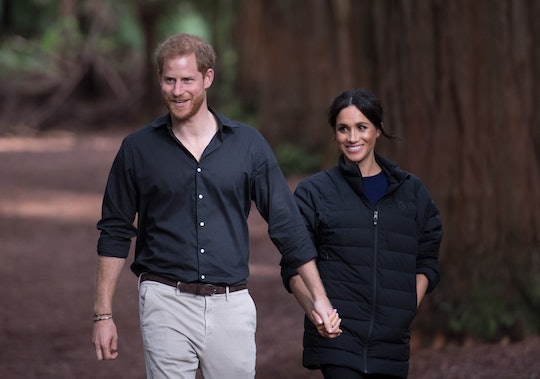 If you don't have any big plans these days, might I make a suggestion? Head over to the west coast of Canada and go for a hike. Especially if you're hoping to have a casual moment with some cool royals like the Duke and Duchess of Sussex. During a recent hike on Vancouver Island, Meghan Markle apparently helped a couple who were struggling to take a selfie all casual-like. And this is the reason we go for hikes, people.

Markle and Prince Harry are currently on holiday with their 7-month-old baby boy Archie on Vancouver Island on the west coast of Canada, according to Hello! Magazine. They have been keeping a low profile while away from their royal duties when it comes to the media, avoiding the spotlight as much as possible after a particularly difficult year with the British tabloids.

While Markle and Prince Harry appear to be enjoying their laid back island lifestyle away from their royal duties, that doesn't mean they aren't willing to do a little communing with the locals. It sounds like they were even willing to lend a hand when one couple was apparently struggling to get a good selfie during a New Year's Day picnic in Horth Hill Regional Park in British Columbia on Wednesday, according to CTV News.

Iliya Pavlovic and Asymina Kantorowicz told the news outlet that they were trying to get a picture of the scenery when they noticed a crowd of people and two dogs close by. One of the women with the group approached them to see if they needed help with their picture... and it was Meghan Markle.

As Kantorowicz told CTV News, the couple initially recognized Suits actress and Markle's pal Abigail Spencer among the group, but didn't realize right away that their photographer was Markle. It was seeing her husband Prince Harry that made the connection. "I froze up. I actually couldn’t believe who it was," she told the Canadian news outlet. "Then I looked over to the side and that’s when I realized Prince Harry was standing there. I kept looking back and forth like, 'Is this actually happening?'"

The couple reportedly found both Markle and Prince Harry to be very friendly, chatting with them and even exchanging a round of "Happy New Year" after taking several photos. And now I feel like the Duke and Duchess of Sussex should simply live in Canada forever and roam the woods with their baby and dogs.

This isn't the first time the Duke and Duchess of Sussex have been seen on Vancouver Island enjoying their more relaxed lifestyle over the holidays. According to ELLE, they were seen going for runs together along the coast, eating at local restaurants, and of course spending plenty of time going for hikes.

Here's hoping this rejuvenating break from their life back in the United Kingdom helps center them for the new year. Or they could simply hang out in the forest helping tourists take selfies. That also sounds pretty great.