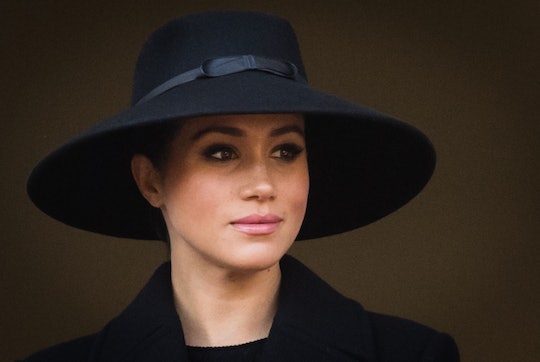 Meghan Markle Hits Back At "Untrue" Tabloid Stories & Yep, She Has Receipts

One month after the Duke and Duchess of Sussex announced their plan to sue the Associated Newspapers (owner of the Mail on Sunday and Daily Mail) for libel, Meghan Markle addressed "untrue" stories about her baby shower, dad, and Frogmore Cottage in new court documents related to the lawsuit. Spoiler alert: Markle and her lawyers brought all of the receipts to back up her side of the story.

If you're a fan of the royals, you've probably noticed a ton of negative or iffy stories about Markle in the press. And although some might argue this is par for the course when you're a famous person, the Duchess of Sussex and new mom finds the ongoing stories upsetting enough to take legal action. So in new documents filed Nov. 11 by Markle's legal team, she debunked a ton of claims, especially where it concerns her baby shower, the private letter she sent her estranged father, Thomas Markle, and the renovations of her home, Frogmore Cottage.

First off, Markle denies $300K was spent on her April baby shower in New York City, an event attended by the likes of Serena Williams and stylist Jessica Mulroney.

“The baby shower (which actually cost a tiny fraction of the $300k falsely stated in the article) was organized and hosted by one of her best friends from university,” court documents obtained by People outline. “The fifteen guests who attended the shower were close friends and included long-term friendships some of which had existed for over 20 years.”

“The claimant’s mother was of course invited, and the claimant also offered to buy her airline tickets," the docs state. "However, her mother was unable to attend due to work commitments.”

As for Markle's father, Thomas, she claims the Mail on Sunday omitted certain parts of the private letter when they published it in February.

“The omitted or suppressed parts of the letter amount to almost half of the actual contents," the filing reads. “The omitted parts demonstrate the claimant’s care for her father and others, as well as her concern about the UK tabloid media exploiting her father.”

And lastly, Frogmore Cottage does not have a "$6,500 copper bathtub, $650,000 of aircraft soundproofing, self-contained yoga studio, orangery or tennis court" paid by taxpayer dollars, submitting legal papers to prove her case. Nor does it have a "private wing" for Ragland to stay in when she visits.

The Associated Newspapers did not immediately respond to Romper's request for comment regarding the Duchess of Sussex's new filing.

Of course, it's unfortunate Markle has to address these issues in the first place. And what Archie's mom does in her private life is her own business, despite her role as a public figure.

It's unclear at this time how Markle's case will pan out in the long run, but it looks like she has plenty of receipts to back up her position of being treated unfairly by the press.