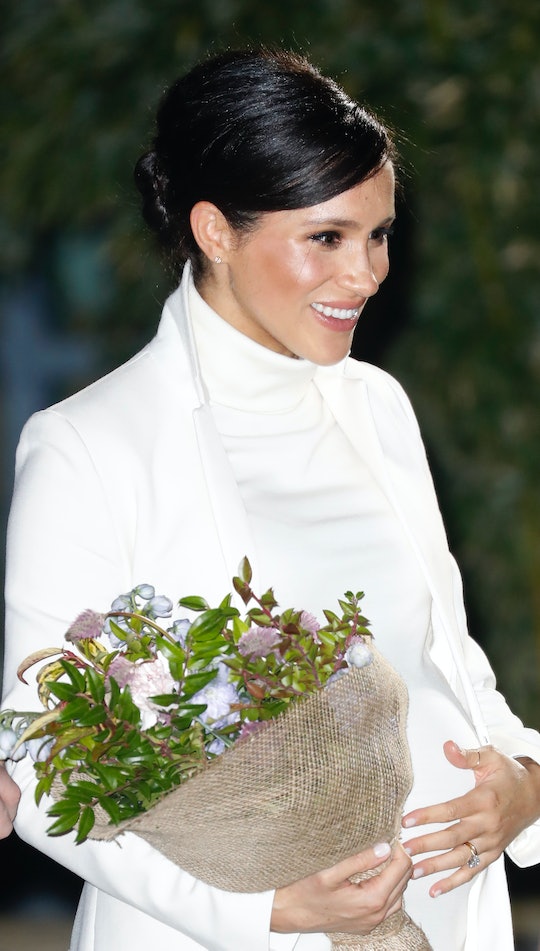 Everything We Know About Meghan Markle's Reported Baby Shower In NYC

When I found out that I was expecting a baby while living abroad, one of my first steps was buying a plane ticket so that I could enjoy a baby shower surrounded by my best friends. A good baby shower is worth crossing oceans for, after all. And as it seems, Meghan Markle's baby shower was reportedly held while she was secretly in New York City, and by all accounts it sounds like it was more than worth the stopover in the Big Apple.

Rumors began circulating last July that Markle and her hubby Prince Harry would be touring North America and Canada as a couple some time in 2019, according to Marie Claire. And while it was originally reported that they would hop the pond in early 2019, according to Cosmopolitan, the announcement of Markle's pregnancy led the public to believe that the pair would delay their travels until at least the fall. The thought was that Markle would want to have the baby and conclude her maternity leave before undergoing such a long trip.

But more recent reports seem to contradict that assumption, as the Duchess of Sussex was reportedly in New York celebrating her coming bundle of joy just months before the baby is due to arrive, according to Harper's Bazaar. Kensington Palace did not immediately respond to Romper's request for comment and has yet to address reports of Markle's reported travels.

On Monday, the Daily Mail reported that Markle was spotted in New York wearing something of a disguise. A woman who has been identified as Markle, who is now seven months along in her pregnancy, appears in a photograph wearing a long navy blue overcoat by Victoria Beckham, along with a grey cap pulled down low on her dark brown hair, as ELLE reported. A royal protection officer reportedly escorted Markle into an SUV, according to the Daily Mail, but despite her efforts to remain incognito, the publication identified the royal by her large engagement ring.

Markle reportedly spent the weekend in town with her close friends, according to Cosmopolitan, and is reportedly in town for a five-day-long visit. Kensington Palace did not confirm the details of Markle's trip, but reportedly told Daily Mail that her travels were "privately funded."

While she was in town to visit, Markle did more than just eat macaroons and sip tea with her friends; according to Hello! Magazine, she was in town for her own baby shower. The lavish affair was reportedly thrown by Markle's best friend Jessica Mulroney and had a guest list made up of 15 of the duchess' closest friends, as Hello! Magazine reported. It was reportedly held at an exclusive Upper East Side hotel, according to Page Six.

A complete guest list hasn't been released, but it's been reported that Priyanka Chopra, Misha Nonoo, and Abigail Spencer were among those invited, as royal reporter Omid Scobie told Good Morning America: "[Guests] include best pal Jessica Mulroney, actress and close pal Abigail Spencer has flown in and Priyanka Chopra is supposed to be flying in especially for this from London Fashion Week."

An unnamed source close to Markle reportedly told Harper's Bazaar that Markle made the trip to catch up with both the people and the city she loves before her baby is born: "The trip is a lovely chance to catch up with friends and spend time in a city she loves. This will be the last time a lot of them will see Meg until after the baby is born so it’s nice to share precious moments."

As Cosmopolitan reported, Markle is no stranger to the power of a good disguise — hats, in particular, seem to be her clothing item of choice when it comes to flying under the radar. She frequently travels in similar getups, once flying to Canada in a baseball cap that kept her identity a secret for as long as can be expected. And a source within the palace reportedly told People that Markle relies on her hat collection to help her go out in London without being spotted as well. "When she does venture out to Pilates or to get her hair done, she normally goes incognito under a baseball cap," they told People.

I have to say, the idea of Meghan Markle blending seamlessly into the bustling streets of the city that never sleeps, hiding her long locks under a Mets cap is more than a little romantic — I can see Lifetime picking up the rights for that movie as we speak. And a secret baby shower in a swanky hotel it just icing on the top of the sweetest of baby cakes.