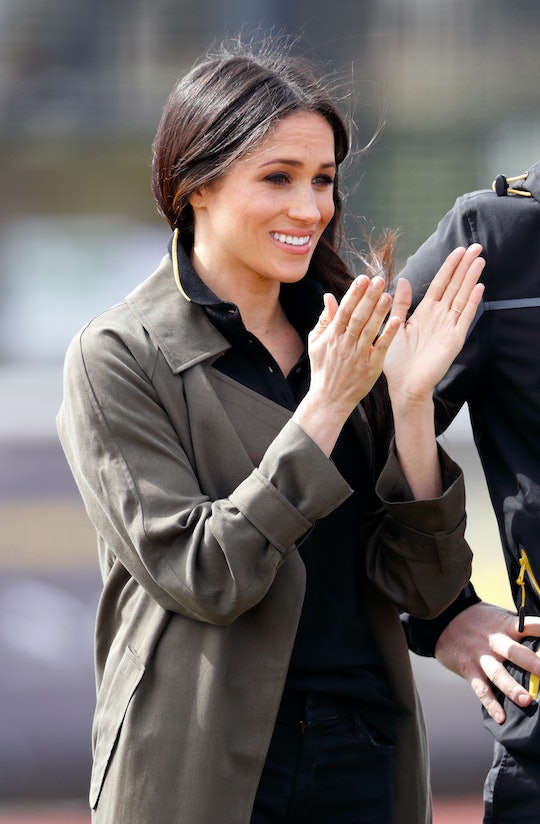 Like many celebrities, the Duchess of Sussex recently used fashion to make a statement. In fact, you could say Meghan Markle honored Supreme Court Justice Ruth Bader Ginsburg without having to say a word. While meeting with the hosts of the Teenager Therapy podcast, Markle donned a cloth face mask and t-shirt that paid homage to the late Supreme Court justice and women's rights advocate.

In a photograph shared by Teenage Therapy on Instagram, most of the t-shirt Markle wore is hidden by the sweater she has casually draped over her shoulders. But for some, the capital R peeking out was enough of a giveaway.

As People identified, Markle's tee is the unisex R.B.G. shirt with retro distressed design sold by the Seattle-based Etsy shop FerrisBuilt. If you had any doubts, the shop now advertises the shirt as being "worn by Meghan Markle in the Teenager Therapy Podcast."

According to Good Morning America, Markle continued her tribute to the late Supreme Court Justice with a cloth face emblazoned with the phrase, "When there are nine."

The quote was famously uttered by Ginsburg during a speaking engagement at Georgetown University in 2015. At the time, Ginsburg was recounting how people sometimes ask her how many women Supreme Court justices would be enough. "People ask me sometimes, when do you think it will it be enough? When will there be enough women on the court?" PBS reported Ginsburg said. "And my answer is when there are nine."

According to People, Markle's black cloth face mask was likely also purchased off Etsy, perhaps this one sold by JustPoshStyle.

It's not altogether surprising that Markle, herself a women's rights advocate, would choose to honor Ginsburg. Shortly after Ginsburg's death from metastatic pancreas cancer complications in September, Markle issued a public statement in which she noted the Supreme Court justice had long been an inspiration to her.

"With an incomparable and indelible legacy, Ruth Bader Ginsburg will forever be known as a woman of brilliance, a Justice of courage, and a human of deep conviction," Harper's Bazaar reported Markle's statement read. "She has been a true inspiration to me since I was a girl. Honor her, remember her, act for her."

Given Markle's recent fashion choices, it seems fair to say the Duchess of Sussex is living up to her own words and opting to honor and remember Ginsburg.