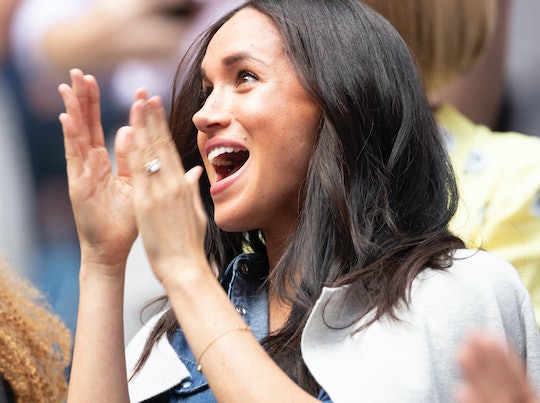 Meghan Markle Is An Amazing Mom Friend, According To Serena Williams

Despite the fact that Meghan Markle has become one of the most famous women in the world, is constantly enduring negative media attention, and is adjusting to mom life, she knows how to be a pal. Just ask Serena Williams, who said Meghan Markle is an amazing mom friend. And she should know, since they've known each other for years.

The tennis star has often been reticent in the past to discuss Markle, the former American actress who married Prince Harry to become the Duchess of Sussex and frequent target of British tabloids ever since. Williams and Markle met at the Super Bowl in 2010, before Markle became an actress on the show Suits. As Markle wrote on her now-defunct lifestyle site, The Tig, in 2017, the pair bonded immediately, as reported by E! News.

"We hit it off immediately, taking pictures... and chatting not about tennis or acting, but about all the good old fashioned girly stuff," Markle wrote. Since then the pair have seen each other through careers, marriages (Williams is married to Reddit co-founder Alexis Ohanian) and, of course, motherhood — something that is a new experience for both of them. Markle gave birth to baby boy Archie in May, while Williams' little girl Alexis Olympia was born in September 2017.

In a recent interview with Access Hollywood, Williams opened up about people who inspire her: namely, Meghan Markle.

When Williams was asked in the interview about one of her friends whom she admires, she explained that Markle is an absolutely lovely human being. "I just really think she’s the strongest — literally the strongest — person I know and the nicest [and] sweetest," she said.

She went on to note that Markle's support of her when she flew to New York to watch her play in the 2019 U.S. Open in September, it was just further proof that the new mom is always there for her friends, no matter the cost.

(Side note: I guess this means baby Archie has already spent a little time on American soil... but I digress.)

Apparently Markle is one of those friends who is willing to drop anything if you have a problem too, as Williams told Access Hollywood:

And that’s just one of the many things that she does for me. I call her, text her anytime, crying, upset — she’s always there. Doesn’t matter what she’s going through, she just sets time away, and she’s just so amazing.

For her part, Serena Williams is also a pretty amazing mom friend. She was the one who threw Markle's baby shower in New York City in February, and reportedly brought her family to meet Archie at Frogmore Cottage after he was born.

But here's the thing about a really wonderful mom friend: they don't go tooting their own horn. They're not in it for the accolades or public displays of appreciation. They are there for their friend when they need them. Period.

So here's to our own personal Meghan Markles, because motherhood would sure as sh*t be lonely without them.