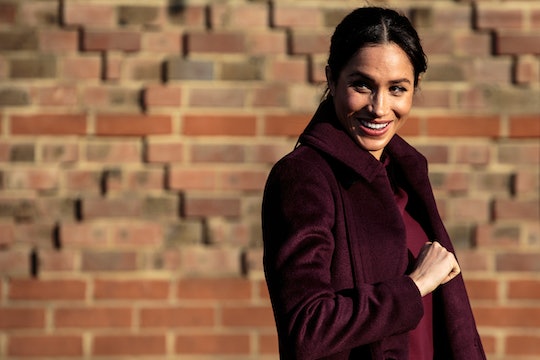 She married into one of the world's most famous families, but things are going so well for the Duchess of Sussex that she's already getting props from her ultra-famous grandmother-in-law. Meghan Markle is reportedly taking on more royal duties in the coming year, with mentorship from the Queen herself. As Marie Claire reported, the news from London reflects very well on Markle's transition to royal life.

In the last year, the former actress and activist went from being a single, working gal to a married working royal. That's a huge amount of change in a short time, but as Town & Country noted, Markle was uniquely qualified to pull it off gracefully due to her experience as a TV star, which involved such being-royal skills as handling a busy schedule and dealing with the press.

Now, Markle's ease at having made the adjustment to life as the Duchess of Sussex has been noticed by the top brass of the family... Queen Elizabeth II herself.

According to the Times of London, the Queen invited Markle to tea recently to discuss which of the monarch's own "royal patronages," or personal charities, she would hand over to Meghan — an honor that implies a growing confidence in Markle's ability to represent the Crown.

According to The Times, the tea took place over the past week at Buckingham Palace.

Plans were reportedly put in place for the Duchess to visit the proposed organizations and announce her first couple nonprofit commitments in January or February of 2109, according to Marie Claire, before her maternity leave to give birth to her and Prince Harry's first child.

The Times predicted that Markle's interest in feminism, education, and the arts will guide her choice of which commitments to take on. Marie Claire added that Duchess has previously met with the Campaign for Female Education, the Association of Commonwealth Universities, and the National Theatre, which tracks completely with her passions.

When Markle visited New Zealand, for example, the official Kensington Palace Instagram account showed her being warmly welcomed by Prime Minister Jacinda Ardern and giving a heartfelt speech about those who have been marginalized needing to take their full place in society. So it's clear she has a serious interest in human rights and the Queen has clearly recognized this as well.

While Markle is totally impressive, no question, it seems to me that the new honors are also a matter of timing. The Queen has been trying to slow down ever since she hit her 90s, with the Daily Telegraph reporting that the monarch began to pass along some of her 600 patronages to the care and nurturing of other members of the royal family.

Kate Middleton, Duchess of Cambridge, has since become the royal patron of Wimbledon, according to the Telegraph, and this year was announced as the first royal patron of London's famed Victoria and Albert Museum. That last move tracks with the Duchess's interest in visual arts (remember, Kate herself takes many of her children's photos).

Markle and Harry are adorable together, and it seems clear they will do great together, doing good. Her first solo charity gig this fall, authoring the forward for cookbook Together: Our Community Cookbook — a collection of multicultural recipes from London's Hubb Community Kitchen — caught a lot of press attention, as Harper's Bazaar noted.

Markle reportedly visited the kitchen often and cooked alongside community members, Harper's Bazaar noted. Markle seems motivated to do good in her adopted homeland and it seems as though she's going to get more of an opportunity to do so in the new year. I'm really excited to hear what efforts she becomes involved in next.