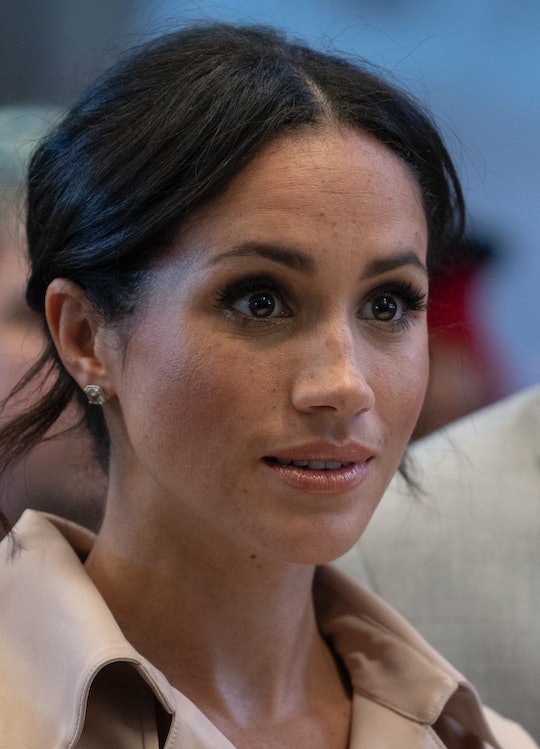 One of the benefits to marrying into the royal family is obviously getting to hang out with the royal kids. If I were the one marrying Prince Harry *he wishes* , the very first item on my agenda would be to get Prince George, Princess Charlotte, and baby Prince Louis to love me. They are clearly the best thing about this whole royal business at the moment, and could be useful allies if the Queen gets cranky or something. I'm not the only one who thinks so either; Meghan Markle is reportedly winning over the royal kids in the cutest, most normal way possible.

Admittedly, I doubt 4-month-old Prince Louis was tough to win over. As someone who spends a ridiculous amount of time trying to get small children to like her I can tell you this is the most malleable age out there. Things could be a little trickier when it comes to 5-year-old Prince George and 3-year-old Princess Charlotte, however. Those two are presumably pretty accustomed to people sucking up to them since they are famous and everything. I feel like they might both have the tendency to be a little wary of people sucking up to them on account of everyone probably does it.

Meghan Markle is obviously a little different from most people to the royal kids though. She is their aunt by marriage, married to the world's most adorable uncle, Prince Harry. Now this could have worked against her, since her new husband has always had a close bond with his niece and nephew. Sometimes kids get jealous if attention is being taken away from them, but it seems like Markle is smart enough to avoid that trap. How does she do it, you ask? The same way everyone gets kids to like them.

A source close to the royal family recently told The Daily Express that Markle is winning the kids over by cooking for them and giving them snacks.

An avid cook, Meghan often pops around to visit with Kate and the kids dropping off treats.

This makes me happy on several levels. First, Markle and the royal kids are becoming friends and this feels like it's probably important for the entire family. Second, Markle has reportedly always loved to cook (remember when she and Prince Harry were apparently roasting a chicken the night he proposed?) and she's still getting the opportunity.

Third and maybe most importantly, she and Kate Middleton are on the path to becoming best friends, I bet, which is all I want from the royal family.

As wise as Meghan Markle is to win over her niece and nephew with food, she's not the first person to give the little royals treats. Their grandmother Carole Middleton has been known to take George and Charlotte to work with her at her party planning business and rewards them with treats when they play-act at being little shopkeepers, according to Hello. And who could forget the iconic photo from Markle's wedding on May 19, when royal wedding photographer Alexi Lubomirski coaxed the most adorable smiles out of the little bridesmaids and page boys with the promise of Smarties (a Canadian candy like M&Ms).

Prince George's smile might have been the widest. He was really pumped about those Smarties.

It stands to reason that Prince Harry would marry a woman who loves his niece and nephew and children in general. He has long been a natural around little kids, but obviously George, Charlotte, and Louis would be the most special kids in the world to him.

Until the couple have their own. And now let's all think about that for awhile.