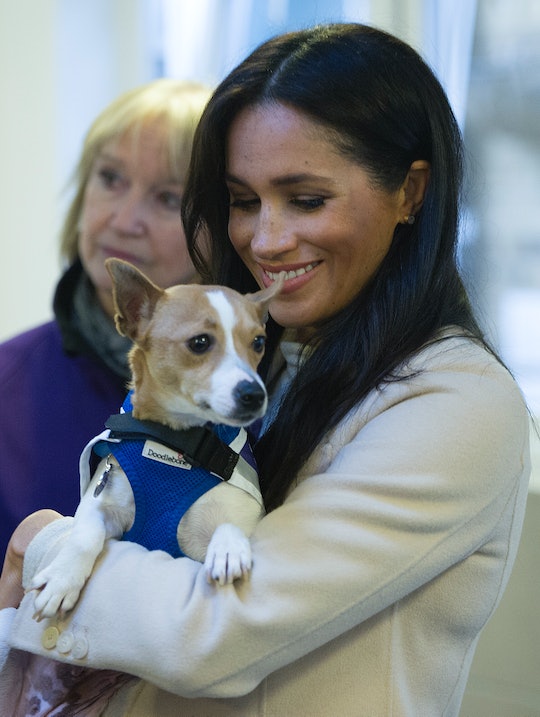 The Duchess of Sussex might be on maternity leave at the moment, but that doesn't mean she isn't willing to work a little when the opportunity comes up to support something that means a lot to her. She strikes me as someone with a strong work ethic, and especially now that she is in a position to affect real change, I definitely get the feeling that there is work she would like to get done, whether she has a new baby at home or not. Most recently this was proven when Meghan Markle wrote an essay about dogs and her self-described title as a "proud rescue dog owner."

Long before Markle became the Duchess of Sussex by marrying Prince Harry and then mother to Master Archie Harrison Mountbatten-Windsor on May 5, she was a whole person on her own. An actress, a philanthropist, a lifestyle blogger, and a lover of her two rescue dogs, Bogart and Guy. And since marrying into the royal family, Markle has reportedly rescued another dog with her husband, according to The Sun, a black Labrador called Oz.

In other words, being a Duchess hasn't changed her long-held passion for rescuing dogs. And now she's written a lovely essay encouraging people to consider rescuing pets and supporting one of her most important patronages, animal welfare charity Mayhew.

Back in January, Markle announced which charities she would patronize and, along with The National Theater in London and Smart Works (a charity that helps women who are struggling to get back into the workforce), she became patron of Mayhew. And as she explained in an essay in the foreword for Mayhew's annual review, she chose this charity because of the incredible work they do helping to re-home rescue dogs and then keep them with their families even in hard times.

"As a proud rescue dog owner, I know from personal experience the joy that adopting an animal into your home can bring," she wrote for the charity. "The role that we, as people, play in rehoming and rescuing these animals is vital, but the role of organisations such as Mayhew is unparalleled."

Markle continued, "What initially struck me about Mayhew specifically is their community based approach not simply on rehoming animals, but in the preventive care that inhibits these cats and dogs from ending up in shelters in the first place."

The Duchess of Sussex went on to praise this organization for being so community-minded, and she is clearly very connected to the work they are doing.

"From Mayhew’s global education programmes to their community work on a micro level with the elderly, homeless, and vulnerable communities, they actively seek solutions that allow people to stay with their animals and have the support they need to do so," Markle wrote, adding:

The choice to adopt a pet is a big decision that comes with much responsibility but infinite return on the investment. It will undoubtedly change your life. As Patron of Mayhew, I encourage you to get involved in whatever way you can — either through pet adoption, volunteering, donation, or spreading the word. We are all interconnected and through these animals we find an even greater link to community and the part we can play.

Meghan Markle has made it clear during her short time as a member of the royal family that she wants to make a difference. Whether she's secretly working on a cookbook in partnership with local women to support the Grenfell Community Kitchen or spreading the word that rescue dogs are the way to go, she is always staying true to exactly who she's always been. Even on maternity leave.