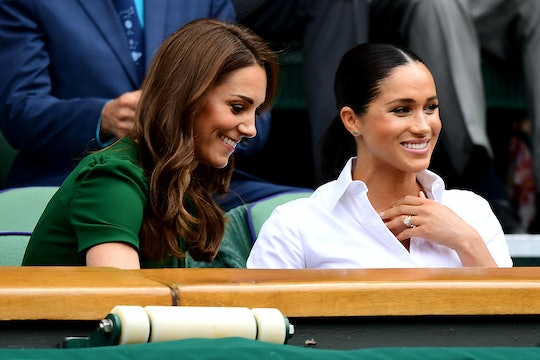 It's been a hot minute since we've seen the two most exciting royal moms hanging out together, but good news: Meghan Markle and Kate Middleton are reuniting for the first time in ages later this month.

The two sisters-in-law have not been seen together in public since July when they attended Wimbledon together alongside Middleton's sister Pippa Middleton. In photos, the three women seemed to be having a pretty grand time together — laughing, talking and looking relaxed. Of course, that was at a time when Middleton and Markle, who was a new mother to her son Archie, were struggling with constant tabloid stories about rumored rifts between their families. Since then, things have changed considerably.

Earlier this year, Markle and her husband Prince Harry announced they would be stepping back from their senior royal roles and moved to the west coast of Canada, dropping their HRH titles and moving towards financial independence from the crown. Middleton and her husband Prince William, on the other hand, are still living in the United Kingdom with their three little ones — Prince George, Princess Charlotte, and Prince Louis — which has left the two women with an ocean between them. Until later this week, that is.

Markle is expected to return to the United Kingdom to join her husband and other members of the royal family to celebrate the Commonwealth Service on March 9, as the Queen herself has requested, according to The Times. Queen Elizabeth will be there, naturally, alongside her son and heir Prince Charles, his wife Camilla Parker-Bowles, Prince William, Prince Harry... and best of all Middleton and Markle. Buckingham Palace released a statement confirming their attendance, as the Daily Mail's Rebecca English reported, so it's happening for sure.

Their children will most likely not be at the service as these have typically been adults-only events, and it's still not known whether or not baby Archie will make the trip with his parents over the pond. But this royal outing could certainly give the two sisters-in-law an opportunity for a catch-up, if they so choose, and one can only hope the two of them can find a quiet moment to have a chat about their lives as busy moms during the event.

This might not be the last royal event the two women share over the next month, as there's hop Prince Harry and Markle could attend Princess Beatrice' wedding in May. But even if they don't, it's important to remember that technology exists for Markle and Middleton to stay in touch even if royal fans aren't witness to it.