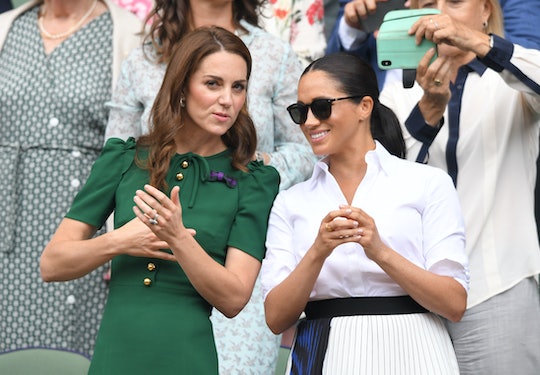 There has been a whole lot written about Meghan Markle and Kate Middleton since the two women became sisters-in-law in 2018. Assumptions made about their relationship, media outlets spreading rumors of rifts. Lots and lots of social media chatter about their hair (admittedly they both have terrific hair). But, through it all, they never say a word. Perhaps because they're too busy making the world a better place? In fact, it seems Markle and Middleton enjoyed some secret outings recently doing just that — showing up to support people who are experiencing struggles with their mental health.

Both the Duchess of Sussex and Duchess of Cambridge have been busy with their various charitable organizations. The two women each have their areas of primary focus. For instance, Middleton has made early childhood intervention a priority in her charitable work, while Markle has been passionate about women's rights since she was a young girl. While both women have sort of chosen a path of their own when it comes to charities, that doesn't mean they don't have shared goals. One in particular is mental health awareness, which is perhaps why they have both been visiting Shout, a crisis text line in London, England, according to Harper's Bazaar. They have reportedly visited with their husbands, Prince William and Prince Harry, several times, also privately. It seems they're all about the work behind the scenes.

Nancy Lublin, the founder of the Crisis Text Line in the U.S., told Town & Country in a recent interview that Markle, Middleton, Prince William, and Prince Harry were instrumental in getting the word out about Shout. "I think they take their role very seriously, really learning about the data. Learning about how things work. I’m so grateful," Lublin told the magazine.

Lublin also noted that the two couples have secretly visited the offices several times, not to mention donating £3 million through the Cambridge' Royal Foundation fund. "They have been into our offices, I think, four times, at this point in time, quietly without anyone knowing," she told Town & Country. "They’ve been to this event without anyone knowing last year. They are really here for the work."

The Duke and Duchess of Cambridge made an official visit to Shout's crisis volunteer event on Tuesday and shared some special moments on the Kensington Royal Instagram feed. They shared a message from themselves as well as Prince Harry and Meghan Markle, writing: "Catherine and I, and Harry and Meghan couldn’t be more proud of what Shout has accomplished. We’re hugely proud and hugely grateful to all of you for being part of this."

People love to talk about a supposed rift between the two couples and make a big deal about imagined body language issues, potential coldness, etc. But it seems clear that Kate Middleton and Meghan Markle, along with their husbands, know how to stay focused on what matters. And what matters to all of them is ensuring people who are struggling with their mental health know how to get access to help. Help in the form of a 24/7 crisis text line like Shout.