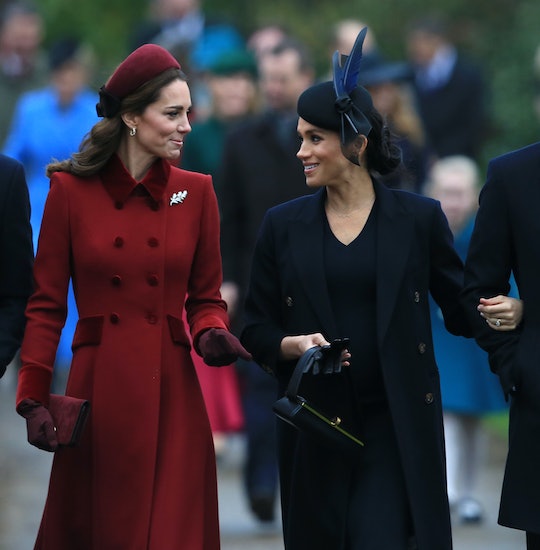 Meghan Markle, Kate Middleton & Their Husbands All Worked On A Powerful PSA Together

Royal watchers have been trying to decide if Kate Middleton and Meghan Markle have been feuding ever since the Duchess of Sussex married Prince Harry last May. Despite the fact that neither woman nor their husbands have ever uttered a word against each other, the rumors persisted. Especially after Markle and Prince Harry decided to branch off and create their own royal house separate from Middleton and Prince William. Well, if you were hoping the two families were feuding, I guess I have bad news for you. Middleton and Markle teamed up again for a pretty terrific reason, so here's hoping that puts those rumors to rest. Probably not, but it would be nice, right?

The two couples, who spent a glorious few months known as the "Fab Four" before the media started to report on rumors of friction, are working together again on a public service announcement to support mental health awareness. It's a subject that clearly remains important to each of them, and they're teaming up to throw the impressive power of their voices behind a new online program from Britain's National Health Service. I mean literally using their voices.

Markle, Middleton, Prince Harry, and Prince William each contributed a voiceover for a PSA directed by Love Actually's Richard Curtis for Every Mind Matters, an initiative from the National Health Service to offer mental health tips online.

The three-minute film for Every Mind Matters aired on Sunday night and featured celebrities like Gillian Anderson and Glenn Close talking about mental health. It also featured narration from royals like Prince William, according to E! News, who can be heard saying in the video, "Everyone knows that feeling, when life gets on top of us."

After this his brother, Prince Harry, added, "We feel stressed, low, anxious or have trouble sleeping. We think there is nothing to be done, nothing we can do about it." The Duchess of Sussex continued by explaining, "But now there's a new way to help turn things around. Every Mind Matters will show you simple ways to look after your mental health."

And finally the Duchess of Cambridge, who was the driving force behind the mental health charity she and Prince William created with Prince Harry, Heads Together, finished by saying, "It will get you started with a free online plan designed to help you deal with stress, boost your mood, improve your sleep and feel more in control."

It's important to note that both couples have remained steadfast in their charitable work to combat the stigma surrounding mental illness. Despite the fact that Prince Harry and Markle moved away from the Royal Foundation back in August to work on their own charities, they still remain a part of Heads Together, according to the organization's website, which states that "both couples will continue to work together on projects in the future."

I know it's sort of juicy and exciting to imagine a big feud between Meghan Markle and Kate Middleton. I know it's fun to imagine the two of them throwing tiaras at each other in the dining room of Kensington Palace or whatever. But it's also harmful. And it's so nice to see these two couples rising above gossip to support mental health. Because that's what it's all about, isn't it?