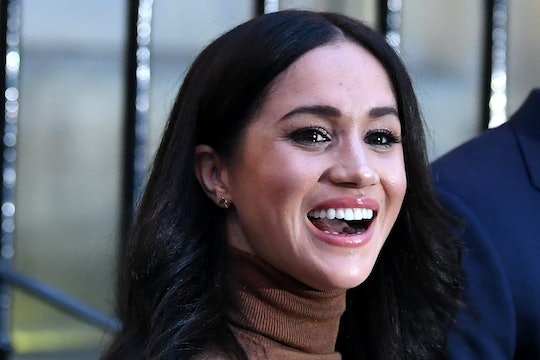 Meghan Markle and Prince Harry have made one thing patently clear since they became parents: they will always prioritize their son's well-being. Yes, the couple might've caused a massive furor when they announced plans to "step back" from their royal duties, but their son Archie is always going to come first for them. Which is apparently why Markle left the United Kingdom shortly after dropping that bombshell. Reports suggest Archie was still back in Canada, where the family spent their holiday, so naturally she wanted to get back to be with him.

A spokesperson for the couple told CTV News that Markle returned to Canada, reportedly to be with Archie, who stayed behind with his nanny. The news outlet also reported that Markle is expected to remain in Canada for the foreseeable future as Prince Harry works with other members of the royal family to work out the details of their complicated split.

Prince Harry and Markle spent their six week holiday on Vancouver Island on the west coast of Canada, returning to the United Kingdom at the beginning of the new year. They presumably spent at least some of their time contemplating what they wanted their future as a family to look like while they were away, because once their holiday was over, they made their surprising, unprecedented announcement.

Taking to their Sussex Royal Instagram page on Wednesday, the couple not only announced that they plan to take a "step back" from their senior members of the royal family, but also that they planned to become "financially independent" of the monarchy and would divide their time between the United Kingdom and North America.

They listed several reasons for this shift, one of the main reasons being their son. "This geographic balance will enable us to raise our son with an appreciation for the royal tradition into which he was born, while also providing our family with the space to focus on the next chapter, including the launch of our new charitable entity," they wrote on Instagram.

It certainly makes sense that the Duke and Duchess of Sussex would want their little boy to be kept away from an admittedly stressful environment. After all, they have been working hard to protect him from the moment he was born. His birth in May 2018 was kept private, as was his christening last summer. He has had exactly one official royal visit, to meet the Archbishop Desmond Tutu in South Africa in September. His parents even decided against giving him a title, choosing to name him Master Archie Harrison Mountbatten-Windsor instead of something like Prince Archie.

In short, Meghan Markle and Prince Harry have made it clear they want to protect their baby boy. So of course they kept him tucked away back on Vancouver Island while they dealt with the fallout from their announcement.