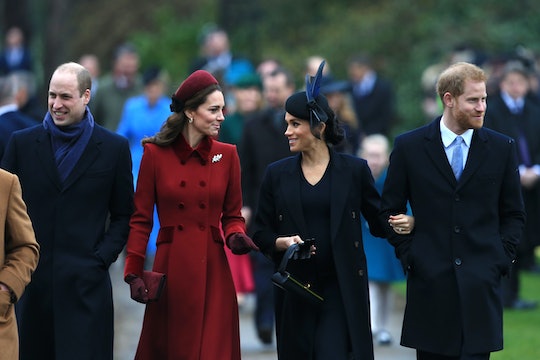 Meghan Markle & Prince Harry Announced Another Split From The Family

Have you ever had to work with someone in your family? I have and I can tell you it wasn't my favorite. I love this person and everything but work is work and family is family and for some of us that's just the way it is, you know? Unfortunately this is not always the case if you happen to be a member of the royal family. Prince William and Prince Harry have been tied to each other their whole lives, and now it seems they want a little freedom. Meghan Markle and Prince Harry announced a big split from Prince William and Kate Middleton on Thursday, because it turns out they are all adult humans who might like to run their own show. Like I said, family and work don't always mix.

The Royal Foundation, started by Prince Harry and Prince William in 2009, was the umbrella organization that managed the two couples' important charities like Heads Together, a charity focused on ending the stigma surrounding mental health issues. This charity was initially founded by Prince Harry, Prince William, and Kate Middleton before Prince Harry's marriage to Meghan Markle last May. The foundation also managed Prince Harry's Invictus Games which supports military veterans and the cookbook Meghan Markle created at the Grenfell Community Kitchen to raise funds for victims of the Grenfell fire, Together: Our Community Cookbook among others.

Buckingham Palace first announced that the two couples would be splitting their households back in March with a statement after both were managed by Kensington Palace, explaining as per Royal UK:

The Queen has agreed to the creation of a new Household for The Duke and Duchess of Sussex, following their marriage in May last year. The Household, which will be created with the support of The Queen and The Prince of Wales, will be established in the spring.

Prince Harry and Meghan Markle's household is now officially just the Sussex household, with their own support team to help them manage their various charitable works. I get that it's sort of sad to see the two couples, who social media called the Fab Four for awhile, officially part ways. But the reality is that the two families are two separate entities. Joined, sure, but also absolutely their own people with their own goals and ambitions.

It makes sense that Prince Harry and Meghan Markle would want to branch out and do things their own way. So hopefully people will understand that family is family and work is work and those pesky rift rumors won't start back up.