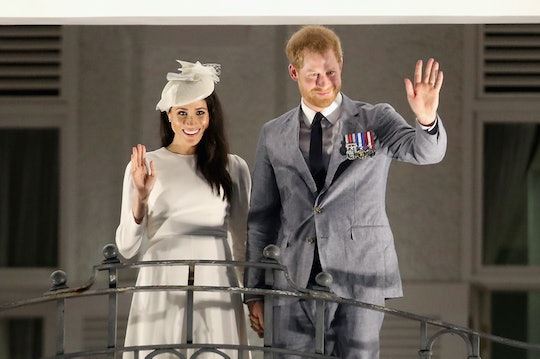 Meghan Markle and Prince Harry are cutting some major ties to the United Kingdom. While details are reportedly not yet finalized, with Markle's recent stay in Canada extending for longer than expected, it seems the couple is ready to close up their offices in Buckingham Palace.

Prince Harry and Markle have seen some pretty intense life changes in the past few months, with their plans to leave royal life and move towards becoming financially independent chief among them. They took to their Sussex Royal social media account to share the news on Jan. 8, upon returning to London after an extended holiday with 9-month-old baby boy Archie. As Prince Harry's grandmother Queen Elizabeth, his father Prince Charles, and brother Prince William worked together to make arrangements for a smooth transition out of royal life for the family, it appears the couple also let staff at their Buckingham Palace office know they would be closing up shop, as per The Sun. Several media outlets have reported that 15 people on their staff have lost their jobs, but that the Queen was aware of the changes. It was also was noted by The Sun that some of the staff members would potentially see themselves allocated elsewhere in the royal household.

Markle and Prince Harry are reportedly returning to the United Kingdom in March to attend Commonwealth Day on the 9th with the rest of the royal family and baby Archie in tow, as per Town and Country. And since they still have Frogmore Cottage, a pretty fantastic home they worked to renovate on the grounds of Windsor Castle, it's not like they have to bunk in with anyone for their visit. So while there seems to be some concern from British tabloids like The Daily Mail that the prince and his family will be ditching the U.K. for good, it seems more likely that they're busy trying to figure out their new roles in the world as not-quite-commoners.

People recently reported the couple are enjoying their quiet lives on Vancouver Island off the west coast of Canada, according to a source, with Markle reportedly spending time cooking and doing yoga and hanging out with Archie and their dogs. Enjoying life as their own separate entities for the first time as a family.

Which doesn't mean they won't head back to the U.K., but it might mean they want to cherish their peaceful time together for a moment or two.

More Like This
Everything Meghan Markle & Lilibet Have In Common
Drake Shared A Photo Of His New Face Tattoo & It's A Sweet Tribute To His Mom
Anne Heche Remembered As "Loving Mother" To Her Two Sons After Her Death At 53
Dan Levy Just Proved He's The Ultimate Uncle With This Perfect, Sweet Answer