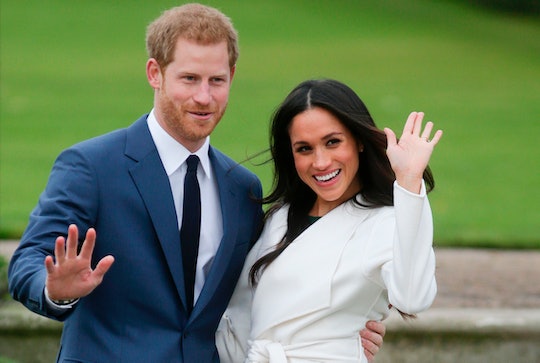 The love story the world can't get enough of was made officially official two years ago today. On Nov. 27, Meghan Markle and Prince Harry celebrated their engagement anniversary with a lovely post on Instagram, reflecting on how much has happened during their time together as the Duke and Duchess of Sussex.

Two years ago, Prince Harry, who was long considered something of a bachelor by royal watchers, asked the former Suits actress to marry him. As the couple told the BBC in an interview at the time, they were just hanging out at Prince Harry's home on the grounds of Kensington Palace roasting a chicken when he proposed. Markle admitted that the proposal was "just an amazing surprise... it was so sweet and natural and very romantic." He got down on one knee, she immediately said yes, and that was that.

Markle and Prince Harry tied the knot in May 2018 at St. George's Chapel in Windsor Castle, with the entire world watching. But as the Duke and Duchess of Sussex looked back at their engagement on Instagram today, it seems they are thinking of how much life has changed since that night two years ago. "On this day, two years ago: 27th of November 2017, Prince Harry and Meghan Markle announced the news of their engagement, later becoming Their Royal Highnesses The Duke and Duchess of Sussex!" the Sussexes shared about their engagement anniversary on Instagram.

"They have since celebrated their wedding anniversary and welcomed their son, Archie, into the world," the post continued. They even shared a new candid photo from their wedding in May 2018, where Markle is laughing and Prince Harry just looks so incredibly in love.

These days, Markle and Prince Harry are busy parenting their 6-month-old son Archie, who was born just a few days shy of their first wedding anniversary.

These two years have also been filled with less-than-lovely moments, as Markle has become such a target in the British tabloids that several female politicians in the United Kingdom felt they needed to send her a letter of commiseration over her treatment. She and Prince Harry have even started lawsuits against some media publications because of it. They also participated in an ITV documentary, Harry & Meghan: An African Journey, about their difficult time with the media.

On their engagement anniversary, though, it's nice that Prince Harry and Markle were able to take a moment to celebrate their love and to share it with the public.