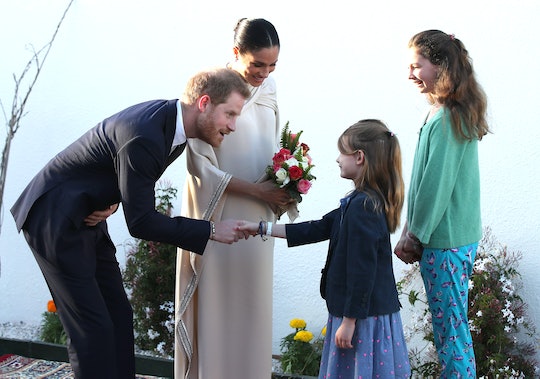 I think we're finally rounding the corner to the end of Meghan Markle's pregnancy, which means we can all start getting excited about seeing the actual baby. As exciting as it is for us strangers, you can almost imagine what it's like for the family. Especially the immediate family; after years of Prince Harry being an adorable uncle he's now going to be an adorable dad. And it looks as though he and his wife have been taking notes on parenting from a few close family experts. In fact, Meghan Markle and Prince Harry might have learned this parenting skill from Prince William and Kate Middleton. Because if you're going to take some lessons, there are worse people to learn from.

Prince Harry and Meghan Markle are on an official visit to Morocco, their last before their baby is expected to arrive some time near the end of April, as the duchess herself told fans during a visit to Birkenhead, as People reported. During their visit to the Atlas mountain region in the country, the couple had the opportunity to meet two young sisters, 5-year-old Rania and 2-year-old Rayhana. Their mother, Clare Minejam, had brought the girls to see the famous royal couple from the family's home in Marrakesh, because as she explained to People, "Most Moroccans know who they are — it’s a Facebook world and people watched the wedding."

The young girls were waving a Moroccan flag and a British flag, and were lucky enough to be spotted by the two royals (who seem to frequently gravitate towards children, in my opinion).

So here's what I want you to notice about this photo; look at the way Meghan Markle and Prince Harry are engaging with the two young girls. They're crouched down in front of them so they can be at eye level. Does this remind you of anyone? A certain brother of Prince Harry who is in line to be King of England, but got called out by his grandmother Queen Elizabeth, who told him to "stand up" when he crouched down to talk to his 2-year-old son Prince George in 2016?

While Queen Elizabeth might not approve, both Prince William and Kate Middleton have often made a point of getting down to eye level with their children, now 5-year-old Prince George, 3-year-old Princess Charlotte, and 10-month-old Prince Louis, as Good Housekeeping noted. Both parents make an effort to crouch down to their level whenever they're talking to them or interacting with them. This helps both William and Kate to gage how their kids are doing.

"She's constantly scanning to make sure they're OK," Blanca Cobb, a body language expert and the author of Methods of the Masters, told Good Housekeeping. "It's as if she's taking an emotional temperature reading to make sure that everything is alright."

Both the Duke and Duchess of Cambridge seem to think that meeting kids on their level is of the utmost importance.

If Meghan Markle and Prince Harry are taking parenting tips from Prince William and Kate Middleton (and they wouldn't be the only one — Anne Hathaway told The Sunday Times that she does this too), I totally support this decision. Not only because Prince George and Princess Charlotte seem like happy, well-adjusted children (and Prince Louis seems like a happy baby). But also because it means the Fab Four are still close despite all of the horrid rumors to the contrary.

And now we just have to sit back and wait to see what happens.