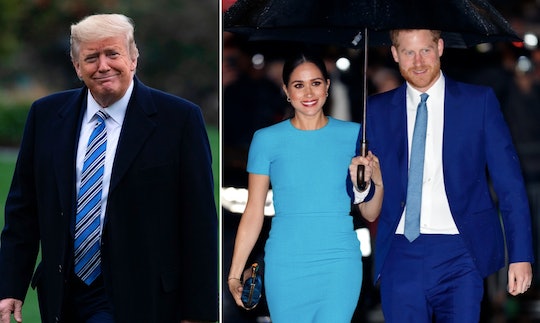 As they embark on the next stage of their life across the pond, the Duke and Duchess of Sussex are apparently facing a bit of opposition from President Donald Trump as they've reportedly hunkered down in L.A. with their son Archie. After Trump tweeted that "the U.S. will not pay for [Harry and Meghan’s] security protection" over the weekend, Prince Harry and Meghan Markle responded to any assumptions there may have been about them relying on public funds from the U.S. government.

"I am a great friend and admirer of the Queen & the United Kingdom. It was reported that Harry and Meghan, who left the Kingdom, would reside permanently in Canada," Trump's full tweet reads. "Now they have left Canada for the U.S. however, the U.S. will not pay for their security protection. They must pay!"

Reports circulated last week that the family is now living in a secluded compound in L.A. due to the announcement that the U.S.-Canada border would be closed to nonessential travel amid the pandemic, as The Los Angeles Times reported.

Following Trump's tweet, a spokesperson for the couple released a statement to CNN assuring Trump that "the Duke and Duchess of Sussex have no plans to ask the U.S. government for security resources. Privately funded security arrangements have been made."

When Harry and Markle announced back in January that they were stepping down as senior working members of the royal family, their shocking news included plans to become "financially independent" in their new lives. While they remain members of the royal family and plan to uphold the values of the Queen, they will no longer be actively using their royal HRH titles — although they remain the Duke and Duchess of Sussex and Harry's position in the order of succession will not change — and they will be free to look for employment. For example, Markle has taken a move back towards an acting career, narrating the upcoming Disneynature documentary, Elephant.

A statement released by Buckingham Palace at the time also made clear that Prince Harry and Markle will not be publicly funded. “They will no longer receive public funds for Royal duties,” the statement said, the BBC reported. A source close to the couple reportedly told People that Prince Charles will be offering his son and daughter-in-law private financial support.

It's not totally clear what prompted Trump to tweet about the couple's security arrangements here in the U.S., but it seems they're focusing on the well-being of their family and setting the record straight.

More Like This
Meghan Markle Proves Once Again She's Totally Going To Be A Snack Mom
Meghan Markle Calls On Men "To Be Vocal" In The Aftermath Of Roe v. Wade Ending
Catherine Reitman Calls It Like She Sees It: “Being A Working Mother Is Impossible”
10 Ways Prince George & Prince Louis Are So Different From Each Other