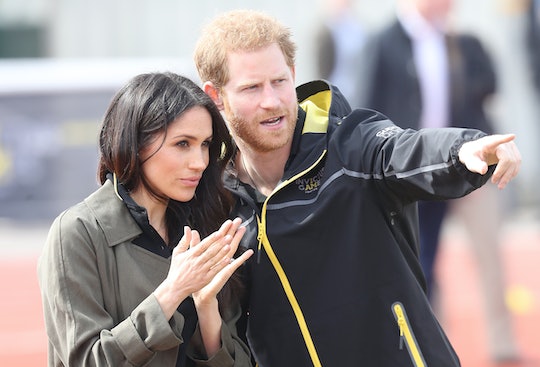 It's just one month away until the world gets to live through that most beautiful of occasions, another royal wedding. I was just a little girl when Princess Diana married Prince Charles, and I probably remember more about that wedding than I do my own. Maybe because mine wasn't televised or something, I don't know. But as everyone gets ready to watch American actress/philanthropist Meghan Markle marry Prince Harry, fans really can't get enough of the wedding details. But what about after the wedding? Well, we now know Meghan Markle and Prince Harry's honeymoon destination, and brace yourself for a deep swoon because of course it's incredible.

Royal watchers will certainly remember that Markle and Harry started dating in 2016, after they were introduced by a mutual friend. The two apparently hit it off quite quickly, as Harry admitted during an interview with the BBC after he and Markle announced their engagement last year. But it was on a trip to Botswana in Africa when Harry really felt he got to know the woman who would one day become his wife, according to Town and Country:

I managed to persuade her to come and join me in Botswana and we camped out with each other under the stars. Then we were really by ourselves, which was crucial to me to make sure that we had a chance to get to know each other.

Which could be why the couple are reportedly heading back to Africa for their honeymoon, this time jetting off to Namibia.

A source confirmed to Travel & Leisure magazine that the new royal couple will not be heading off to Europe after they get married on May 19 at St. George's chapel in London. Instead, Harry and Markle will go to a place with deep, emotional significance for the prince in particular. Back to Africa, the continent where his father, Prince Charles, took him and his older brother William when the two boys tragically lost their mother in a fatal 1997 car accident in Paris. As Harry told Town and Country in 2017:

My dad told my brother and me to pack our bags — we were going to Africa to get away from it all. This is where I feel more like myself than anywhere else in the world. I wish I could spend more time in Africa. I have this intense sense of complete relaxation and normality here.

If the reports are true and the couple is planning on spending their first holiday as husband and wife in Namibia, it looks as though they've picked an incredibly beautiful honeymoon destination. They can go on safari tours and see animals like zebras, antelopes, and possibly even lions in the Sossusvlei sand dunes, a popular tourist destination. But, perhaps best of all for the famous couple, Namibia is one of the least populated countries in the world. Other famous couples like Angelina Jolie and Brad Pitt have visited Namibia for just that reason; not only does it offer a diverse, incredible landscape, but it offers a higher degree of privacy.

As Meghan Markle get caught up in wedding fever along with the rest of us, I hope they're giving themselves a moment to really get excited about their honeymoon. Maybe visiting some lonely stretches of beach together, going on a safari tour; plus all of the other things that people tend to do on their honeymoon that aren't really any of our business.

And can I just say that I love the fact that they are going off the beaten track, to a quieter country in Africa? A place where they fell in love not so long ago, and a country where Harry was able to grieve the mother he lost in private.

What a great choice.