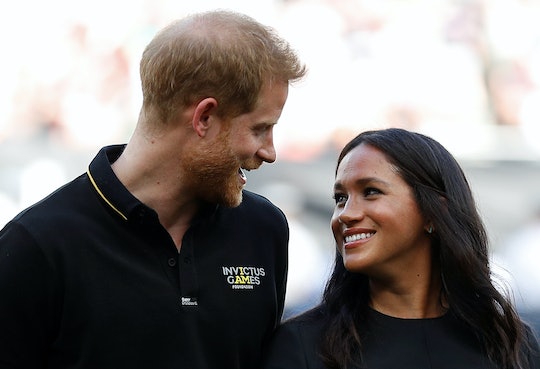 Prince Harry and Meghan Markle might be from two very different worlds (she is an American actress who was raised in California, he is a prince who was raised in castles), but they still manage to have one pivotal trait in common. They both have a history of wanting to do some good in the world. The couple have begun to use their social media account to try to encourage people to become Forces for Change, and on Friday they began to share inspiring quotes to encourage young leaders of the world. Markle and Prince Harry's post about Princess Diana was a beautiful, simple reminder that she was, at her core, a humanitarian. And that they are both dedicated to carrying on her important work.

Princess Diana became known for more than her beauty and grace and royal marriage in the years before her untimely death in 1997. She also became known for her deep wells of empathy as a philanthropist. Whether she was breaking down barriers for the members of the LGBTQ community who were suffering from AIDS, working with youth, drug addicts, opening up the dialogue about mental health, or campaigning against landmines in Africa, she was dedicated to helping others, as per Harper's Bazaar.

And so, her son and the daughter-in-law she never had the chance to meet wanted to dedicate a social media post to her work.

As the Duke and Duchess of Sussex explained in a caption:

Words have the power to inspire, which is why we’re happy to share some of our favorite quotes.From members of the public to public figures, from teachers and students to young leaders, we begin with a quote from Diana, Princess of Wales.

The quote reads, "Carry out a random act of kindness, with no expectation of reward, safe in the knowledge that one day someone might do the same for you." This post had several social media users sharing how Princess Diana's legacy continues to touch their lives to this day.

Diana has the best quotes. We will forever miss her

She was an amazing person. It is wonderful to see her legacy carried forward

Perhaps the two women would have found a common ground because Meghan Markle has already shown a genuine love in helping others with her royal platform in unique ways. Since marrying Prince Harry, Markle has taken on patronage of several charities focused largely on helping to empower women. And of course, the two women would have shared a love of Prince Harry and the couple's baby boy, Master Archie.

It's a beautiful thing to see the Duke and Duchess of Sussex carrying on Princess Diana's work.