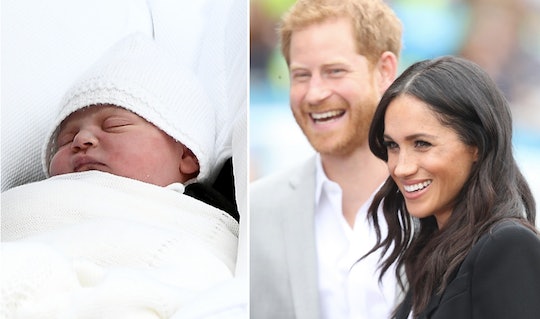 They might be getting ready to be parents, but the Duke and Duchess of Sussex are already a pretty amazing aunt and uncle. In a super sweet comment penned for their nephew, Meghan Markle and Prince Harry shared a message to Prince Louis on his first birthday and it feels safe to say that it shows just how close the royal family really is.

On Tuesday, April 23, Kate Middleton and Prince William's youngest child, Prince Louis, celebrated his first birthday, coincidentally just as the Duke and Duchess of Sussex are awaiting the arrival of their own first baby. (Could they share a royal birthday? Maybe!) In honor of the occasion, Prince Louis' parents uploaded a few new photos of him that Duchess Kate took herself at their country home, according to Kensington Palace.

"The Duke and Duchess of Cambridge are delighted to share these new photographs of Prince Louis ahead of his first birthday tomorrow," an Instagram post from Kensington Palace read. "The photographs were taken earlier this month by The Duchess at their home in Norfolk.‬"

As though that weren't adorable enough, Meghan Markle and Prince Harry's new account, @SussexRoyal, commented on the photo and said: "Happy Birthday Louis! Sending lots of love from both of us," with a cake and red balloon emoji, and then an "xo," for a hug and kiss.

Though the comment itself is swoon-worthy enough, it might even confirm what's been long-speculated, which is that Markle is actually the one running her own Instagram.

For those who need a debriefer, until recently, royals were pretty much barred from any social media use, to the point that when Markle got engaged to Prince Harry, she actually had to delete her (very popular) social accounts, like Instagram and Twitter, as People reported. However, it's a new dawn and a new day, and Markle has influenced the royal family in so many ways (Harry reportedly stopped smoking! And he works out!) and perhaps she even convinced them that social media is actually an important way to connect with their loyal followers.

It's common for the royals to have a social media presence only insofar as they contribute to the collective one, such as @KensingtonRoyal. There, the family shares updates, but presumably through a social media manager, so that the individuals themselves are not directly accessible. Though they haven't stated this is the case, some believe Markle is running the Sussex's account because of everything from the Americanized spelling of certain words and the very specific filter frames she used to use on her own account.

This latest post offers even more fodder for speculation, given that it is, after all, written from the first person. Love from "both of us" would imply that it's either Meghan or Harry who not only has access to the account, but can at the very least comment using it. Now, who would be more inclined to use IG? The woman who had a multi-million person follower count and built her brand online, or the man who presumably has never so much as drafted a tweet in his life, per royal protocol? The answer seems, well, self-evident, if it is the case.

Regardless of who or where the comment came from (though I remain skeptical that an assistant wrote a message so heartfelt and from the first person), it's clear that the Sussexes and Cambridges are closer than ever, likely in anticipation of the brand new cousin who's about to join the family. As the world celebrates Prince Louis' birthday and gets ready for Markle to deliver her first royal child, there will likely be many more well-wishes shared around their IG accounts in the coming days and weeks. Royal fans will just have to keep their eyes peeled and their apps open.

More Like This
Prince Louis Is Asking His Parents Questions As He Tries To Understand Queen Elizabeth’s Death
Meghan Markle Wore A Treasured Pair Of Earrings To Honor The Queen At Her Funeral
Post Malone Shared A Bunch Of Sweet & Candid Details About Life With His 4-Month-Old Daughter
Kate Middleton Shares Her Kids' Sweet, Yet Honest Reaction To Seeing Old Photos Of Her