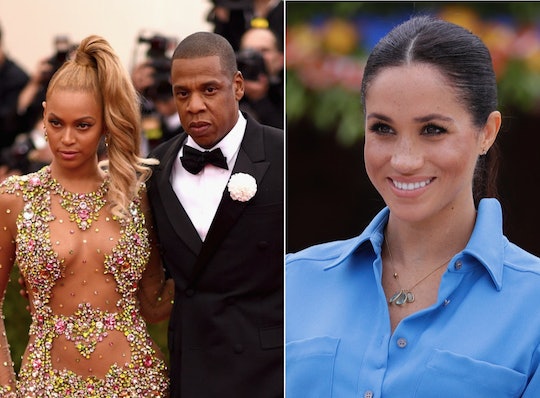 Meghan Markle Had A Very Relatable Reaction To That Beyoncé Tribute

Meghan Markle must feel as though she's living one heck of a surreal life. After years of working as an actress on Suits and achieving a pretty serious level of fame, she has now moved on to a whole new level that has to feel pretty strange. Now she's not simply actress and lifestyle blogger famous, she's royalty famous. Nay, she's not simply royalty famous; she's Beyoncé famous. And Meghan Markle's reaction to Beyoncé and JAY-Z's portrait tribute to her proves she is still sort of coming to terms with her new normal, which makes her more relatable than ever... if you ask me.

So let me take you back to the big moment, shall I? In February, Beyoncé and JAY-Z won a BRIT Music Award for Best International Group, according to Rolling Stone. While most people might have shown up in person in London to accept such a prestigious award, Mr. and Mrs. Carter did one better: they recreated a scene from their "Apesh*t" music video, which the couple shot at the Louvre in Paris, France.

This time around, however, they went a different direction from featuring the Mona Lisa. Instead, the couple stood in front of a gorgeous portrait of the Duchess of Sussex, which is fine because the Mona Lisa already had enough press, I think.

As if that wasn't special enough, Bey took to her Instagram feed to honor Markle even further with a tribute to the expectant mother, writing, "In honor of Black History Month, we bow down to one of our Melanated Monas. Congrats on your pregnancy! We wish you so much joy."

I mean, just when you thought Markle couldn't possibly get any more famous (what with having Prince Harry as a husband and Queen Elizabeth II as a grandmother-in-law and such), there goes Beyoncé kicking up a fuss over her. That has to turn a girl's head, right?

Generally speaking, Markle has said in the past that she avoids reading anything in the news about herself, according to The Daily Express. And who could blame her when the media seems to go after every little decision she makes? It's important to protect her mental health, especially now that she has welcomed baby Archie to the family.

But when Beyoncé acknowledged her with such a touching tribute, Markle apparently had to say something. Her friend and makeup artist Daniel Martin told news correspondent (and fellow Markle friend) Gayle King during the CBS special Meghan And Harry Plus One that the two shared a text exchange over the moment, as Marie Claire reported.

"I sent her a pic — I think it was a screen grab of the two of them in front of the portrait. I think all I wrote was, 'Girl.' She wrote me back like the big eye emoji," Martin told King, according to Marie Claire, alluding to this emoji: 😳

I mean really, is there anything else that needs to be said? The big eye emoji is elegant in its simplicity. It manages to convey shock, gratitude, happiness, humility, joy... all of the things Meghan Markle must have been feeling but couldn't quite put into words.

It's probably exactly the way any of us would react in the same situation. Which means Meghan Markle is still one of us.