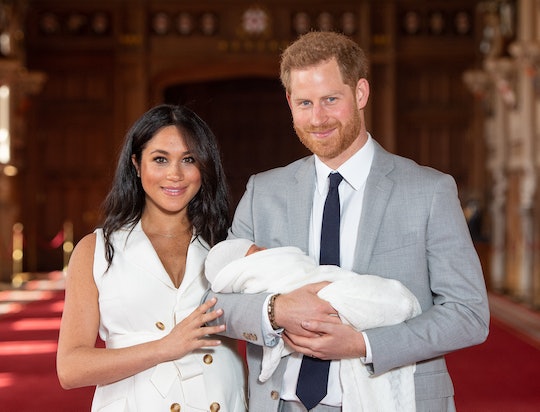 Prince Harry has always been open about his love for his late mother, Princess Diana. As hard as it must have been for him to lose her at the tender age of 12, he clearly keeps her memory close. Especially, it seems, now that he's become a husband and father as well. For example, according to a new report, Prince Harry and Meghan Markle included Princess Diana in Archie's nursery in a tactile and beautiful way. Because she might be gone but she is most certainly not forgotten.

It has been almost 22 years since Princess Diana died after sustaining injuries in a car crash in Paris, France on Aug. 31, 1997. More than two decades where her two sons, Prince William and Prince Harry, have been forced to move on with their lives without their mother to watch over them. Two decades that have seen both men get married, Prince William to Kate Middleton in 2011 and Prince Harry to Meghan Markle in 2018, and become fathers themselves.

While each man honors their mother in a myriad of different ways, Prince Harry has reportedly made an effort to include his mother's memory as a daily part of his son Archie's life. Simply by including a photo of her in her grandson's nursery, according to Us Weekly, where she can watch over him as he sleeps. This simple and sweet addition to Archie's nursery makes so much sense, considering how much Prince Harry loved his mother.

In fact, a royal insider told Us Weekly that his love for his mother was one of the things that drew him closer to Markle from the beginning of their relationship: "It was during their first trip to Africa together, shortly after they started dating, that Harry first opened up to Meghan about his mum and the pain he suffered following her death. He still gets very emotional talking about it. One of the things that first attracted Harry to Meghan was the way her kindness, determination and strength reminded him so much of his mum."

This isn't the first time the Duke and Duchess of Sussex have honored Princess Diana in recent months. When little Archie was christened on July 6 on the private chapel at Windsor Castle, there were two very important guests on hand who some might not have recognized. Both of Princess Diana's sisters, Lady Jane Fellowes and Lady Sarah McCorquodale were on hand for the big event, according to People, as they were at Prince Harry's wedding in May 2018.

Markle and Prince Harry also included the Spencer side of the family in Archie's birth announcement, according to Harper's Bazaar, a gentle nod to his mother's continued importance in his life.

On Saturday, Aug. 31, as Cosmopolitan reported, Prince Harry and his brother Prince William are expected to spend the anniversary of their mother's passing doing what they have always done, spend time together going over their memories of her. And her picture will continue to be perched in baby Archie's nursery, a grandmother he has never met but who nevertheless watches over him still.