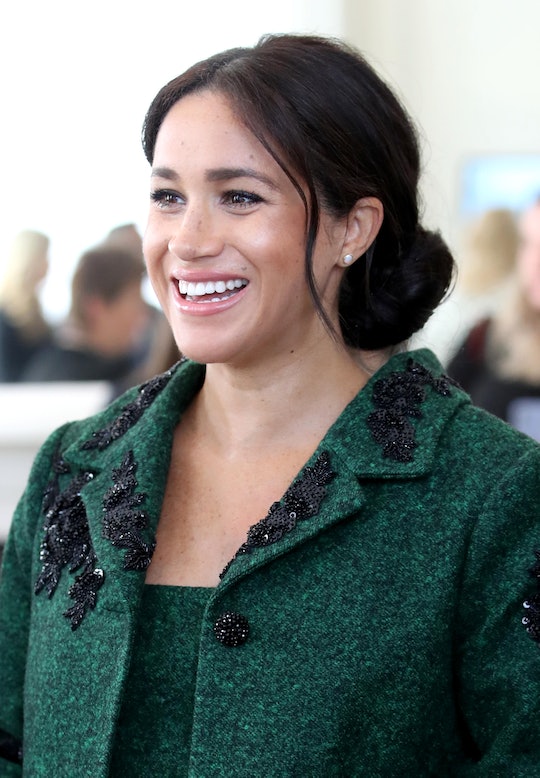 The Duke and Dutchess of Sussex are reaching the end of their highly publicized pregnancy, with Baby Sussex expected to make his (or her) arrival later this spring. In the meantime, Markle is prioritizing her baby preparations and slowing down on her royal obligations. And, her latest focus has her eyes on food — baby food that is. Meghan Markle reportedly may make her own baby food, and that's so Californian of her.

More Like This
Mandy Moore’s Son & Hilary Duff’s Daughter Had The Cutest Play Date Ever
Meghan Trainor Shared A Video Montage Of Her Newborn That'll 100% Give You Baby Fever
Amy Schumer Shared An Emotional & Sweet Post On Gene’s 2nd Birthday
“He Is Hysterical”: 12 Of Meghan & Harry’s Cutest Quotes About Archie

You might be thinking, but, surely, there's a royal chef who can do this for her? Nope, Markle reportedly wants to take a totally hands-on approach with her child, according to People.

"Her California roots are coming through," a source told People.

"She’s being mindful of what she puts in her body and on her skin and even her at-home cleaning supplies," the source continued. "She’s hyperaware of what she’s using. She’s looking for natural things."

"She eats cleaner, and she’ll probably make her own baby food," the source added. "It’s going to be clean living for this baby.”

Making baby food is a pretty simple concept, according to Momtastic. Choose your fruits and veggies, steam them, then puree them.

It's also pretty trendy. Since 2007, there's been a fairly steady drop in baby food sales, according to Quartz.

Making your own baby food is great way to introduce baby to different textures, tastes and spices that might not be offered by commercial baby foods. It's also cheaper and healthier, because you can control the ingredients, according to Canada's Global News.

And, according to Reuters, a study found that babies who are fed homemade food may end up liking more foods than babies fed store brought food.

Generally, babies can start eating solids at 6 months, according to the CDC. But they should still have formula or breast milk as their main source of nutrition.

Recently, feeding your baby ready-made food has been the source of mom-shaming. One Tree Hill actress Jana Kramer posted a photo of her grocery store conveyor belt filled with jarred food, only to be bombarded with comments about her decision, according to Vogue.

This isn't Markle's only parenting decision that differs from what the royal family may typically do. The Duchess of Sussex is reportedly planning a natural home birth with the help of a doula, according to Vanity Fair. She's also reportedly been receiving regular acupuncture therapy to help with blood circulation and other pregnancy-related ailments.

In fact, she may even try hypnobirthing, an approach to labor that involves visualization and breathing techniques, according to Glamour. Through the act of self-hypnotism, the mother is able to block out fear and pain during labor.

It's a far cry from the traditional way most royals have given birth in the past, but as Markle has shown, she's not one to follow protocol, according to Reader's Digest. She didn't have a maid of honor, her father didn't walk her down the aisle, she's been known to engage in PDA, she wore a sleeveless dress to an royal event, and she signs autographs. That's only the half of it.

So, is making baby food that big of a deal? Probably not. It's just not the way royals are used to doing things. Maybe a bit of change will be good for them — and hopefully for the baby as well.