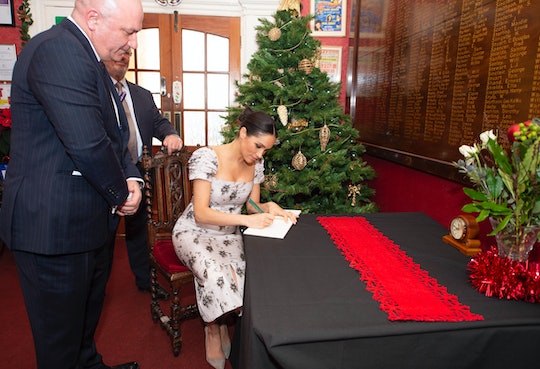 Everyone knows the Duchess of Sussex is accomplished. She was already a TV star, fashion blogger, and charity advocate before her marriage into the British royal family. But when Meghan Markle showed off her calligraphy skills during an engagement, it proved that her hidden talents are seemingly endless. Life can be so unfair that way.

The revelation about the extent of Markle's skill with a quill began when Markle made a solo stop at Brinsworth House, a home for retired artists and those who spent their lives in the entertainment industry, in Twickenham, England, Kensington Palace noted on Twitter.

The retirement home is part of the Royal Variety Charity, an organization for which Queen Elizabeth is patron, as Kensington Palace added on Twitter. The Queen reportedly offered some of her royal charity responsibilities to Markle, as the newest working royal, so this could be a hint. This may well be a sign of which causes Markle picked or is being given, but even if it's just a coincidence, the charming newlywed — who will give birth to her child with Prince Harry next spring, as per People — really hit it out of the park while decorating Christmas cards with the home's residents.

As PopSugar reported, Markle was helping out with some art projects and decorating a photo frame when her penmanship was noticed. Not just any penmanship... that perfect, flowy script you (and everyone else) would like to take a couple hundred hours of time to perfect for, well, some future occasion.

If Markle's calligraphy is seemingly perfect, it's likely because the former actress spent time as a professional wedding calligrapher to support her slog through the acting ranks, according to Good Housekeeping.

She even was a calligraphy instructor for a stint, meaning she really had the art mastered. "I think handwritten notes are a lost art form," Markle told Good Housekeeping. "The idea of someone taking the time to put pen to paper is really special."

PopSugar noted that while it's against royal protocol for the Windsors to sign fan autographs, royal fans have certainly gotten an eyeful of Meghan's handwriting from when she has signed her wedding registry and guestbooks at engagements, as she did in these photos.

Chatting and doing crafts with the residents, as People noted, Markle sported a floral dress, gray coat, and her signature bun, adding to those she visited that she was feeling "very pregnant."

Keep in mind, this isn't the first time Markle has impressed: Her very first solo official engagement, working with the women of London's Hubb Community Kitchen, revealed that Markle is also a whiz in the kitchen.

And don't forget her speaking skills. The new royal has given speeches on a number of occasions, including while in New Zealand with Prince Harry, in which she has revealed her passion for human rights and feminist causes.

I know, I know, it just doesn't seem fair sometimes, but Markle may have just inherited her poise.

People magazine reported that although there was talk that the Queen would break royal protocol and invite Markle's mom, Doria Ragland, to join the royal family for Christmas at Sandringham, it's reportedly not going to happen — at least, not this year. However, the Queen was said to be incredibly impressed with Ragland, a social worker and yoga instructor, at Harry and Meghan's wedding in May. I guess talent and poise just run in the family. Markle just can't help it.