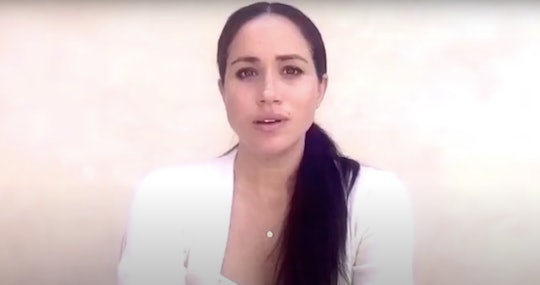 In a powerful speech for the 2020 graduates of her high school alma mater, Meghan Markle addressed the Black Lives Matter protests that have broken out across the country and encouraged the students to lead with "love" and "compassion" during this significant moment in history.

Years after Markle graduated from Immaculate Heart High School, an all-girls private prep school in Los Angeles, she delivered a moving speech for this year's graduates via video message. "For the past couple of weeks, I've been planning on saying a few words to you for your graduation and as we all have seen over the last week, what is happening in our country and in our state and in our hometown of L.A. has been absolutely devastating," she began.

"I wasn't sure what I could say to you. I wanted to say the right thing. And I was really nervous that I wouldn’t, or that it would get picked apart, and I realized — the only wrong thing to say is to say nothing," the Duchess of Sussex said, addressing the police killing of George Floyd, an unarmed Black man who died after a white police officer knelt on his neck for over eight minutes as he repeatedly said "I can't breathe."

As someone who lived through the 1992 L.A. riots herself, Markle told the graduates that she had first-hand experience of how frightening things could be. "I remember the curfew and I remember rushing back home, and on that drive home, seeing ash fall from the sky and smelling the smoke and seeing the smoke billow out of buildings," she recalled. "I remember seeing men in the back of a van just holding guns and rifles. I remember pulling up to the house and seeing the tree that had always been there, completely charred. And those memories don't go away."

Earlier in the week, Markle echoed a similar message in a statement through the Queen's Commonwealth Trust, a charity supported by both her and her husband Prince Harry. "Young people are vital voices in the fight against injustice and racism around the world," the statement read. "As a global community of young leaders we stand together in pursuit of fairness and a better way forward. Silence is not an option."

Ultimately, in her speech, Markle left the young graduates with an important message about how to respond during times of adversity and challenge.