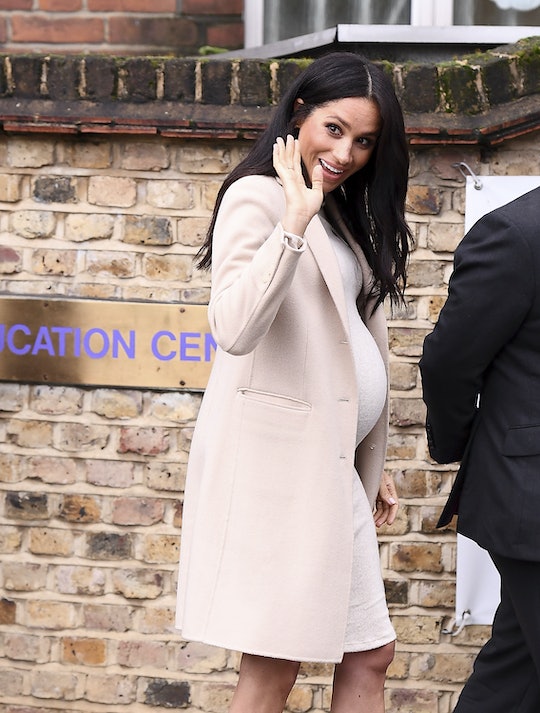 Meghan Markle might be getting ready to welcome her first child in three months or so, but she'll always have a soft spot in her heart for her furry friends. Or so I assume as someone who pays attention to her life, of course. And I suspect I'm not far off with my assumptions; after all, when it came time for the new Duchess of Sussex to choose which worthy causes she would patronize as a member of the royal family, one of those was working with rescue dogs. Which meant that Meghan Markle spent the day with dogs as part of her job and I guess all this royal nonsense is worth it in the end.

Markle spent the day on Wednesday visiting one of her new royal patronages Mayhew, an animal welfare charity that offers community support and veterinary care for people who are struggling to afford medical treatment for their pets. The charity also helps to re-home pets in need, and offers international management of rabies and dog population. So in other words, they're doing all of the good things for people and their pets. And now the good people of Mayhew are lucky enough to have Meghan Markle as their patron.

Although to be fair, I suspect Meghan Markle got a little something out of the deal. A whole lot of dog petting.

Markle certainly seemed to be lapping up all of the dog attention despite the fact that she was wearing a beige dress which we all know shows dog hair like nobody's business.

One can only assume she no longer has to do her own laundry, yet another reason to marry a prince. You can play with dogs all day and then someone else has to deal with all the hair.

She also met a man named Wully who had used the Pet Refuge service provided by Mayhew in the past; this service helps people who have lost their homes the opportunity to keep their dogs, which is why Wully and his two dogs, Azzy and Gallis, were able to hang out with Markle on Wednesday.

Meghan Markle established herself as a true animal lover long before she met and married Prince Harry. When she was an actress on Suits living in Toronto, Canada, she had two rescue dogs she clearly adored. One of whom attended her May wedding at St. George's Chapel in Windsor Castle in the car of Queen Elizabeth, as per Elle.

In fact, it's Markle's special kinship with animals that reportedly helped to endear her to Queen Elizabeth; when she met the Queen for the first time, Prince Harry told the BBC that his grandmother's famous corgis fell in love with her immediately:

I’ve spent the last 33 years being barked at. This one walks in, absolutely nothing...

I'm really happy for Meghan Markle that she gets to hang out with lovely dogs as part of her royal duties. Because I do rather feel as though the whole royal thing can be a but daunting... why not spend a little time with some comfort dogs if you can?