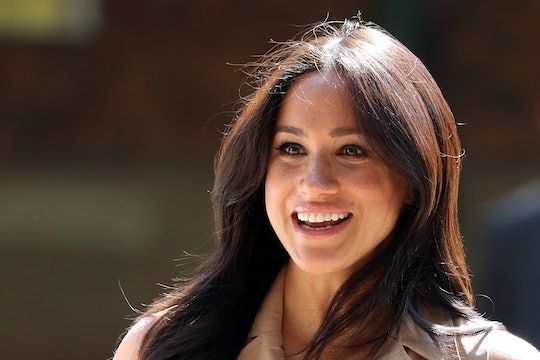 In her first television interview since stepping back from Her Royal Highness title and senior royal duties, Meghan Markle discussed her Disney+ gig voicing Elephant, a new Disneynature documentary. While the voice acting role is said to be the first job the Duchess of Sussex has done since she and Prince Harry announced their plans to step back from their royal roles, she apparently didn't earn a paycheck. Instead, Markle asked that Disney donate what they would have paid her to the wildlife charity Elephants Without Borders.

"I'm really grateful to have the opportunity to be a part of bringing this story of elephants to life," Markle said in a Disney interview filmed sometime last summer and aired, for the first time, on Good Morning America Monday.

In Elephant, Markle narrates the journey an African elephant named Shani and her young son Jomo make with their herd — led by matriarch Gaia — across the Kalahari desert in Southern Africa. During their journey, the herd encounter a number of other animals and face a number of obstacles, including the death of their leader and the birth of a new elephant.

"These creatures are so majestic and at the same time, they are so sensitive and so connected," Markle said in the interview. "You see in this film just how remarkable they are. Their memories are amazing, the close connection of the herd, the protectiveness of their young — I think they are a lot more like us than they are different."

Markle also acknowledged that her and Prince Harry's past work with Elephants Without Borders in Botswana has put her in a unique position to speak out about protecting and safeguarding elephants. "I've been very lucky to be able to have hands-on experience with elephants in their natural habitat," she said in the interview. "When you spend time connecting to them and the other wildlife you really understand we have a role to play in their preservation and their safety."

Reports began surfacing in January that Markle had signed a voiceover deal with Disney ahead of her and Prince Harry's royal exit. Further investigation suggested the Suits alum may have had her mind set on voice acting for some time. In reviewing video from The Lion King's July 2019 London premiere, People found footage of Prince Harry speaking to Bob Iger, chairman and CEO of the Walt Disney Company, about Markle's interest in doing voiceover work.

While it's unclear if Markle will continue lending her voice to other film or television projects, Elephant appears to be a perfect step back into small screen work for the Duchess of Sussex. And she's hoping viewers take away one really important message from the nature documentary.

"I hope that when people see this film they realize how connected we all are and if we had more of an awareness about the obstacles they are facing we would take care of each other, this planet and these animals in a very different way," she told Good Morning America.

The Disneynature documentary Elephant is now available to stream on Disney+.