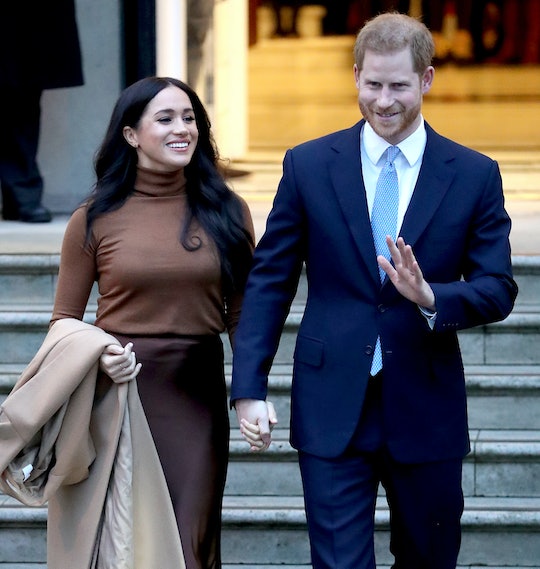 Meghan Markle & Disney Have Reportedly Teamed Up For Some Voiceover Work

Could Disney soon add a real-life princess to its roster of actors? Well, less than a week after the Duke and Duchess of Sussex announced plans to step down as senior members of Britain's royal family, several reports have suggested that Meghan Markle is working with Disney in a voiceover deal. While this could potentially be the former Suits actress' first gig since opting to "step back" from her royal duties, it reportedly doesn't come with a paycheck. Instead, according to The Times, Markle's reported Disney deal is set to benefit charity.

Although she's only just recently announced plans to step down as a senior member of the royal family, Markle has reportedly already signed a deal with Disney, according to The Times. The U.K. newspaper reported that the deal will see the Duchess of Sussex doing voiceover work for an unnamed Disney project in exchange for an unspecified donation the the conservation charity Elephants Without Borders, a nonprofit geared toward protecting elephants which the royal couple have been involved with since at least 2017.

Romper has reached out to Disney for confirmation and comment, but did not receive an immediate response.

While reports of Markle's potential deal with Disney remain unconfirmed, People dug up footage of Prince Harry speaking to Bob Iger, the chairman and CEO of The Walt Disney Company, about his wife's interest in voiceover work during The Lion King's London premiere back in July. According to People, Prince Harry can be heard asking Iger if he knows Markle does voiceovers in video footage taken during the premiere.

"Oh, really," Iger reportedly responded. "I did not know that."

While Markle's reported deal with Disney could provide a peek at what her future as a member of the royal family with financial independence might look like, again, this gig reportedly doesn't come with a paycheck. As such, it'll be interesting to see how her and Prince Harry's future continues to unfold.

Reports of Markle's rumored deal with Disney came just before the queen announced her support for the Sussexes' "desire to create a new life as a young family." In a statement issued Monday, Queen Elizabeth II said the family have "had very constructive discussions" regarding the Sussex's future, but stressed these were "complex matters" and that more work needed to be done before things were finalized.