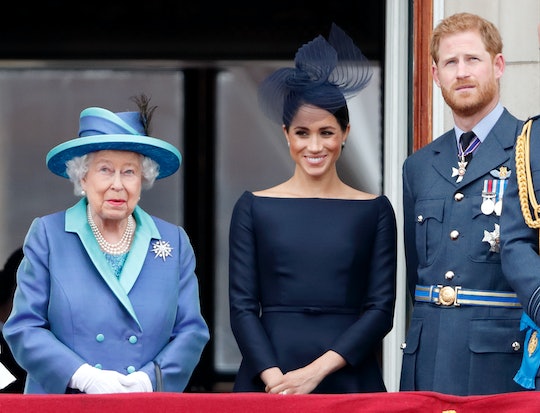 In a rare statement issued Monday, the Queen said she supports Prince Harry and Meghan Markle in their desire to carve out both a new life and new roles for themselves within the monarchy. As part of preparations for the young couple's eventual departure as senior members of Britain's Royal Family, the queen announced there would be "a period of transition," which would see Prince Harry and Markle divide their time between Canada and the United Kingdom.

"My family and I are entirely supportive of Harry and Meghan's desire to create a new life as a young family," Queen Elizabeth II said in a statement issued today. "Although we would have preferred them to remain full-time working Members of the Royal Family, we respect and understand their wish to live a more independent life as a family while remaining a valued part of my family."

According to the queen, "Harry and Meghan have made clear that they do not want to be reliant on public funds in their new lives."

On Monday, the queen reiterated that the young couple's desire to step down as senior members of the Royal Family were "complex matters" and noted that more work still needed to be done before all of the details were finalized. For the time being, however, she announced that "a period of transition in which the Sussexes will spend time in Canada and the UK" had been agreed to on Monday. Additionally, she called recent discussions regarding Prince Harry and Markle's future "very constructive."

Although the queen did not expand farther upon what Prince Harry and Markle's period of transition will look like, the Duchess of Sussex is already reported to have flown back to Canada to be with son Archie. It remains unclear if Prince Harry would also soon return to the Commonwealth country or if Markle and Archie would soon join him in England.

It seems that, whatever happens, royal supporters won't have to wait too long to gain a clearer picture of what Prince Harry and Markle's new roles might look like. The queen announced Monday that she'd asked for final decisions to be reached in the coming days.