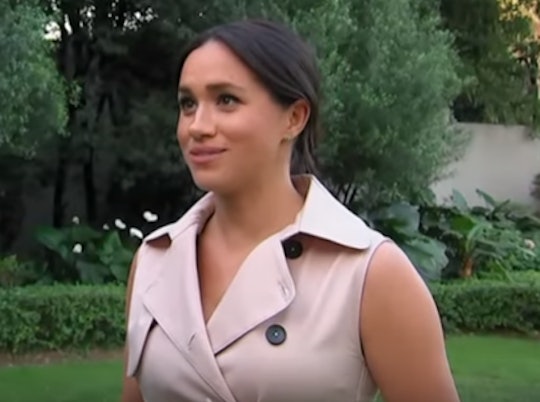 Meghan Markle Wants To Protect Her "Boys," Because Loyalty Works Both Ways

Much has been said in recent weeks about Prince Harry's relationship with his wife Meghan Markle. Ever since the couple opened up about their struggles as members of the royal family in the ITV documentary Harry & Meghan: An African Journey, royal watchers have been talking about how protective the prince is of his wife. Which is sweet, of course, but also a bit of an old-fashioned stereotype. The husband is the protector, the wife a fragile little bird who needs to be watched over. Well, it turns out Meghan Markle wants to protect "her boys" as well, because the Duke and Duchess of Sussex don't seem to really go in for antiquated relationship tropes. And Meghan Markle does not strike me as the sort of woman who will sit back passively as her family is maligned on a daily basis.

Markle's friend and makeup artist Daniel Martin sat down for an interview with Gayle King of CBS This Morning on Friday to discuss the couple's recent documentary Harry & Meghan: An African Journey. He admitted he found it difficult to watch his friend getting emotional on screen, as she did when she discussed what it's been like to be a new mom to 5-month-old son Archie and new wife who is constantly being criticized by the British tabloids. But Martin went on to note that Markle is not a "weak person" at all, as per People. In fact, he believes her vulnerability comes from a place of inner strength.

As Martin explained in the interview, as per Town & Country, Markle is fiercely protective of her own little family:

I feel like she has a lot on her plate and I feel like she just wants to make sure her boys are safe. I know her, she's gonna totally take care of this. It's just understanding the ways about it.

The Duchess of Sussex has been taking steps towards figuring out how to take care of at least one issue plaguing her family; the consistent intrusion of the British tabloids. While she was on a royal tour of Africa with Prince Harry and baby Archie at the beginning of October, it was announced that she was suing The Daily Mail for publishing a private letter she had written to her father, Thomas Markle, as per Forbes. At the same time, Prince Harry took on two other British tabloids, The Sun and The Daily Mirror, for allegedly hacking into their phones. As Prince Harry explained in the ITV documentary, he was taking steps to make sure he would "protect his family" now that he had one. The same is clearly true for Meghan Markle. Even her body language when she is with her husband and son, always touching and expressing love, is a sure sign of her desire to keep them safe from anything that might harm them.

Meghan Markle and Prince Harry are clearly a united front. The couple are taking steps to make sure their family is protected, not because of some outdated ideals about masculinity and femininity. But because they respect each other, love each other. And want to preserve all that is special in their lives. Together.