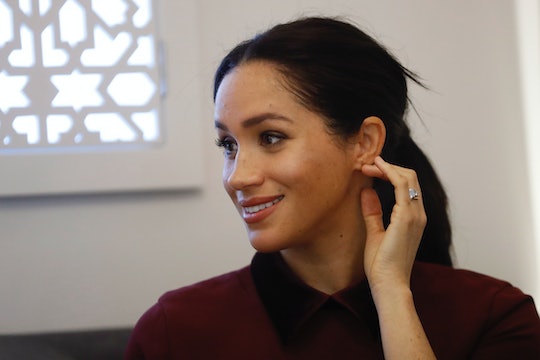 Don’t despair, Markle’s world isn’t devoid the fun of Christmas gifts; it’s just that the normal order of business is shifted and the royal family opens their presents on Christmas Eve, according to Cosmopolitan.

The whole family gathers at Sandringham for Christmas, their estate in Norfolk on the British coast. On Christmas Eve, members of the family arrive throughout the day in order of rank, according to Hello! Magazine, with Prince Charles generally arriving last. Around tea time, the family will get together to finish the Christmas tree and exchange gifts, the publication reported, which are usually fun, gag-type gifts.

In 2017, for instance, Markle was a hit with the queen after giving her a singing toy hamster, according to ELLE. A source reportedly told the media that the corgis tried to get ahold of the toy, which the queen found just delightful. The gag gifts didn't stop there, though; according to Glamour, Markle gave Prince William a Tam O’shanter hat with fake hair attached, throwing back to comments he’s made about his receding hair.

The gift exchange is one of the few times when children are allowed to join the adults over the holiday celebrations, according to a former chef for the royal family. Darren McGrady wrote in the Daily Mail that the family’s choice to open gifts on Christmas Eve hearkens back to their German heritage. “In a tradition called Heiligabend Berscherung, they will open their presents. The gifts, jokey and inexpensive rather than lavish, are piled on trestle tables alongside name tags,” McGrady revealed, according to the Daily Mail.

The gift-giving is one of the few moments during the celebration that is casual and laid-back, as the family abides to a fairly strict schedule across Christmas. After the presents, there is a a formal dinner held by candlelight at about 8 p.m., as Hello! Magazine reported. The men then gather for a drink while the women retire to their respective rooms and homes, according to the publication.

The next morning, according to the BBC, the whole family comes together for church service and to greet members of the public, and this is likely what Prince Harry was referring to in an interview with Radio 4 when he said: “There’s always that family part of Christmas, there’s always that work element as well.”

Last year marked Markle’s first Christmas spent with the royal family, even though she and Prince Harry were only engaged at the time. That was an honor that not even Kate Middleton received despite the fact that she and Prince William had dated for years, according to The Express.

No matter how steeped in tradition — even stuffy and jam-packed — the royal family's Christmas still holds the most important element of all: family gathered to enjoy one another’s company. That will make it merry for all — along with those gag gift, of course.