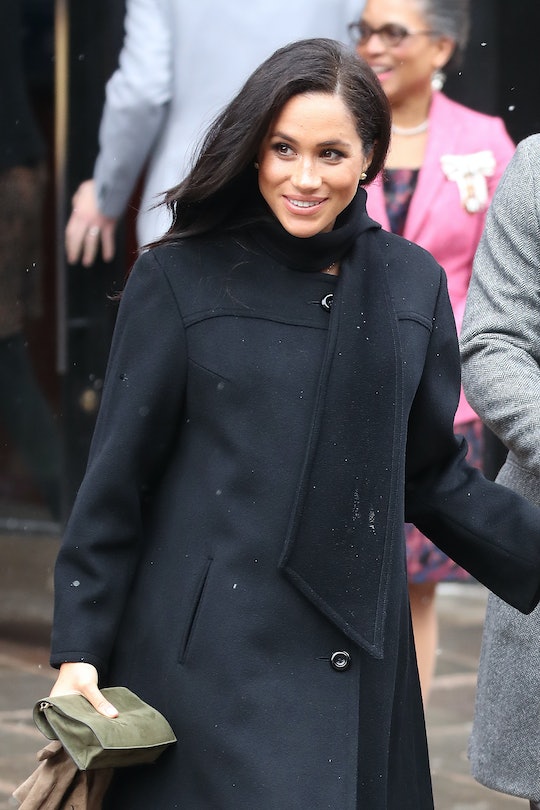 Actress, philanthropist, Duchess of Sussex — Prince Harry's bride has worn a lot of hats, and a lot of titles. But as her due date rapidly approaches, there's a new job to put on her royal resumé and she's embracing it with style and grace. Recently, Meghan Markle was spotted wearing a beautiful "Mummy" necklace after her baby shower in New York City, and it seems like a sign that she's more than ready to embrace this addition to her identity.

Kensington Palace announced in October of last year that Markle and Prince Harry were expecting. Since the announcement, Markle has been strategically sharing details with her many fans about how her pregnancy is progressing. During her regular outings with Prince Harry, Markle has shared when her baby is due, as well as the fact that she doesn't know the sex of the baby.

But not all of the details were revealed by the mom-to-be; some came from the rumor mill. And while visiting New York City to see some of her nearest and dearest friends, according to ELLE, word on the street is that Markle made time for a very special occasion: her baby shower.

A source inside the palace reportedly told E! News that a couple of Markle's besties, Serena Williams and Amal Clooney, were behind the big party. The guest list included a whole slew of A-listers who came out to show their support. Markle was later photographed leaving the soiree wearing some baby-themed bling, as People reported.

Only a bit of the necklace in question was shown in the paparazzi photos, but from the portion that could be seen, People identified the necklace as a piece by Jennifer Meyer that reads either "Mommy" or “Mummy," as both the U.S. and British version are available in Meyer's collection.

If you're as interested in getting your hands on the necklace as I am, you'll be pleased to hear that it is currently available for purchase. The official Jennifer Meyer website has the sweet gold necklace for a cool $850. But don't be surprised if it sells out quickly, as Markle is quite the trend setter.

It is unclear whether or not Markle received the necklace as a gift at the party or if she wore it in, but considering reports that she saved the joy of opening presents for when she got home with Prince Harry, according to People, odds are she had it before.

But the fact that she didn't set aside time during her celebration for opening gifts doesn't mean she didn't receive any. According to Entertainment Tonight, guests placed their gifts for mama and baby in a decorated crib as they entered the party. From there, they enjoyed cuisine by Michelin star Chef Jean-Georges Vongerichten, fresh cotton candy, and live music from harpist Erin Hill. Rather than play traditional baby shower games, Markle and her guests enjoyed a flower decorating tutorial, as Gayle King explained on CBS This Morning:

I've never seen anything like this at a baby shower ... They brought in somebody to explain how to arrange flowers. We all each made an individual base and then Meghan... got in touch with an organization that I've never heard of, Repeat Roses, and all of those are donated to different charities.

According to Hello! Magazine, King went on to explain that the party, and the gesture, were all in line with Markle's character:

She's very kind, she's very generous, a really, really sweet person. So I think her friends just wanted to celebrate her... It was a very, very small, private, affair and just a very special time for her. Because having a baby is a great joy. Let's not lose sight of that.

Like much of Markle's time in the palace, her pregnancy has included a few breaches of protocol for royal babies. According to Cosmopolitan, simply the act of having a baby shower at all is a bit taboo for a royal, as ABC News' royal expert Victoria Arbiter explained to the magazine: "They have added pressure that they're clearly very wealthy and a lavish baby shower would be seen as highly inappropriate."

But Markle has been charting her own path through royal life, so it is no big surprise that her pregnancy would progress a bit differently. One thing is for sure: Markle is including "Mommy" — or "Mummy," into her list of titles and she's doing it in a way uniquely her own.