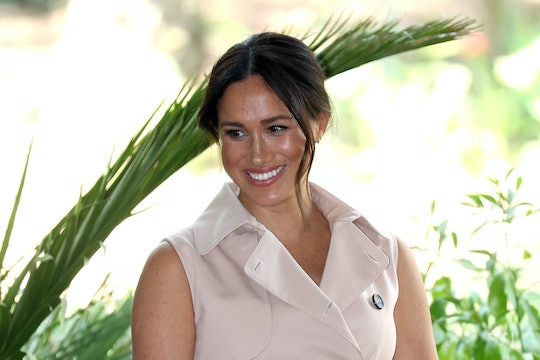 With the Duchess of Sussex's outraged husband announcing Tuesday he's filing a lawsuit against the Mail on Sunday for what he termed as "false" and "deliberately derogative" coverage of his wife, Meghan Markle's bracelet has seemingly taken on new meaning. The dainty piece of jewelry reportedly has a special message behind it, especially in the context of the couple's lawsuit.

The Duke and Duchess of Sussex's decision to take legal action against the Mail on Sunday occurred Tuesday, on what should have been the peaceful conclusion to the couple's successful Africa trip, during which they introduced baby Archie to Archbishop Desmond Tutu, among other charity-minded activities.

Prince Harry announced the development in a forceful statement, saying, according to CBS News: “Unfortunately, my wife has become one of the latest victims of a British tabloid press that wages campaigns against individuals with no thought to the consequences—a ruthless campaign that has escalated over the past year, throughout her pregnancy and while raising our newborn son."

He continued: “There comes a point when the only thing to do is to stand up to this behaviour, because it destroys people and destroys lives. Put simply, it is bullying, which scares and silences people. We all know this isn’t acceptable, at any level. We won’t and can’t believe in a world where there is no accountability for this."

The Duke of Sussex ended his powerful message with a thanks in advance to fans for all of their support, noting how the couple could use good wishes right now.

In response to Prince Harry's legal suit, a Mail on Sunday spokesperson tells Romper via email: "The Mail on Sunday stands by the story it published and will be defending this case vigorously. Specifically, we categorically deny that the Duchess’s letter was edited in any way that changed its meaning."

So where does Markle's bracelet fit into all of this? The piece of jewelry first caught the public's eye when the new mom attended a meeting Tuesday with Nelson Mandela's widow, Graça Machel, according to Vanity Fair. And looking closely at the bracelet, it is actually more than a fancy piece of jewelry, as it features a small evil eye charm. The bracelet's "eye talisman is used to protect and shield" from a "malevolent" glare, according to Alemdara's company website. The studio's owner, Mariella Tandy, "created Alemdara after her own enamel evil eye bracelet continuously attracted attention."

The site continues: "The bracelet was given as a gift of protection by her Turkish mother-in-law whilst she was pregnant. As per Ottoman legend, a Hand of Hamsa or an evil eye on your person wards off any ‘evil eye’ or jealousy from others, such are their ability to dispel negative thoughts and energy."

Although it may sound a little out there for some people, I can't judge Markle as I could never imagine what it must feel like to be in her vulnerable position. If you were criticized no matter what you did in basically any situation, you might consider some sort of "protection" or "good luck" charm, too.

So why not? And since it's the Duchess of Sussex we're talking about, after all, it can't hurt that the accessory is fabulously understated and tasteful. Any karmic benefits of wearing great jewelry are just a bonus, in my opinion. Stay strong, mama!