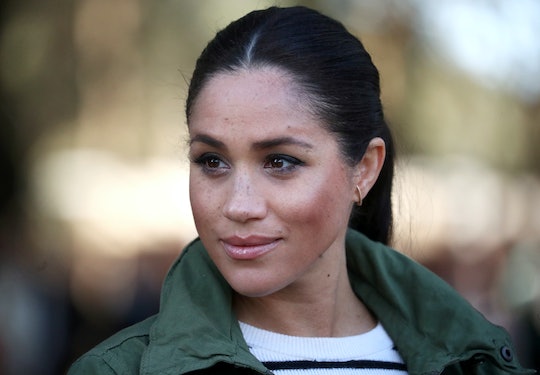 by Christina Montoya Fiedler
May 6, 2019

The newest member of the royal family is here, and everyone is on cloud nine. And, aside from the beaming parents, there's lots of other family members who are just waiting in line to share well wishes of love and support — even those, who have had rocky relationships with the parents in the past. Indeed, Meghan Markle's dad also reacted to Baby Sussex's birth on Monday, and it's perhaps a little tamer than you'd expect.

In a statement obtained by Entertainment Tonight, the Duchess of Sussex's father, Thomas Markle, said on Monday: "I'm delighted to hear that mother and child are doing well. I am proud that my new grandson is born into the British royal family and I am sure that he will grow up to serve the crown and the people of Britain with grace, dignity, and honor." Though he is reportedly estranged from his daughter at the moment, according to Fox News, it didn't stop him from wishing her well.

As you may recall, Thomas was a no-show at the royal wedding in May 2018 due to health problems and he allegedly set up a paparazzi shoot in exchange for money, according to The Hollywood Reporter. And that questionable behavior reportedly led Meghan to write a letter to her father, asking him to please stop making public displays of their family issues, according to The Sun. BTW, that letter was supposed to be private, but Vanity Fair previously reported that her father had apparently leaked it to the press.

Still, he only had love to send regarding the news of his new grandson. "God bless the child and I wish him health and happiness, and my congratulations to my lovely daughter Duchess Meghan and Prince Harry, and God save the Queen," Thomas went on to say in his statement to Entertainment Tonight.

The arrival of baby boy Sussex was announced this morning, Monday, May 6, in a statement from Buckingham Palace and in an announcement on the couple's Instagram page.

Baby Sussex's birth announcement continued, "The Duchess and baby are both healthy and well, and the couple thank members of the public for their shared excitement and support during this very special time in their lives.More details will be shared in the forthcoming days."

Markle gave birth Monday morning at 5:23 a.m. local time and her mother, Doria Ragland, was at her side, according to The New York Times. And while a name has not been announced yet, the royal family did say that baby boy was a healthy 7 lbs., 3 oz. Baby Sussex is also the first multiracial royal baby in the monarchy's recent history, and is set to be seventh in line for the throne, the New York Times reported.

Time will tell if Thomas Markle has more to say to his daughter about his new royal grandson. Chances are that he will, and judging by his past interactions with the press, he'll be more than happy to let his feeling be known.