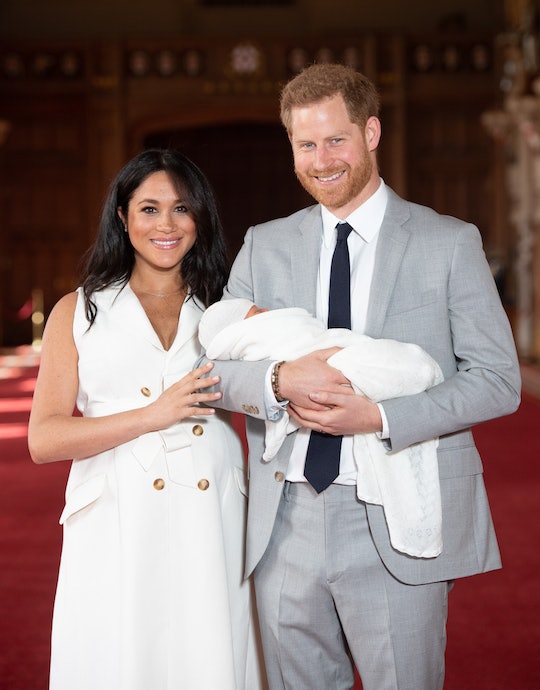 I am married to an Irishman, which means I am forced to keep any and all enthusiasm for the Royal family quietly to myself. Which is why this morning, when I watched The Duke and Duchess of Sussex walk out to show off their tightly swaddled heir, I merely sipped my coffee, loudly whistled a Cranberries tune, and willed myself to not say aloud, “Oooooh I love her dress! Isn’t Meghan Markle’s dress after giving birth sooo pretty?”

Because it totally was. And I am not exactly what one would call a follower of sartorial trends. (I am writing this wearing a t-shirt that says "Cat Mom." I do not own a pet.) So for even me to take note of the Duchess’ getup, shows that her white trench dress with button detail was indeed a bit of a stunner. She paired it with, as Harper's Bazaar reported, some beige Manolo Blahnik BB suede pumps, and a delicate turquoise necklace by Jennifer Meyer.

The dress was created by the London-based British designer (and rising fashion star) Grace Wales Bonner. It's a touching and cool choice for the Duchess, as The Business of Fashion reported that Wales Bonner was born to a Jamaican father and English mother. FWIW, Markle, too, is biracial. According to BoF, Wales Bonner "uses her mixed-race heritage as a key reference in her collections."

So people may now look forward to the trench dress becoming the go-to ensemble post-birth. Because as we have quickly learned, Markle is just one of those magical, charmed trendsetters who makes even fashion oblivious idiots such as myself take note of her style. Why do I know Markle loves Everlane tote bags? How is this even in my brain? And why did a photo of her carrying said tote make me want one, as if I am also the Duchess of Something? I know full well that in a week’s time my tote will be filled with Kind bar crumbs and tampons that have gotten squeezed out of their wrappers. And yet...

Though looking closely at the photo of Markle post-birth, there's far more than her outfit that is catching people's eyes — particularly the eyes of mothers. It's what we recognize in her face and body that is making us smile with recognition. I mean I certainly wasn't wearing Manolos when I exited the hospital with my child. That whole surreal blip of time was so blurry, I could have been wearing skis for all I remember. But I see the way the Princess's dress is belted over her still-swollen belly... I recognize the puffiness of her face, which is struggling to contain her beaming expression...

It's one of the funny things about childbirth, no? We can dress it up however we like. A woman could stand in a palace, upon a gilded throne, dripping in diamonds, but moms know what really just went down. We know the amazing and insane gore and glory of what Markle just experienced. And really, she could have come out in yoga pants and my Cat Mom shirt. (Though the Queen might taken issue.) It wouldn't have mattered. Her blissed out, triumphant grin is what's making her gorgeous.

Which of course is what makes Meghan and Harry so intriguing to so many. In a break from all the other royal fancy fancery, they really seem to want to make a go at being real people. Which is going to be tricky for them, to say the least. I spied another quote from Wales Bonner on retailer Totokaelo's site, and I can't help but wonder if it also spoke to the Princess: "Generally I am interested in spaces that allow people to freely negotiate the boundaries of their own representation."

I wish them luck. And I am crossing my fingers they name him a symbol. Like Prince. Just to mess with everybody.