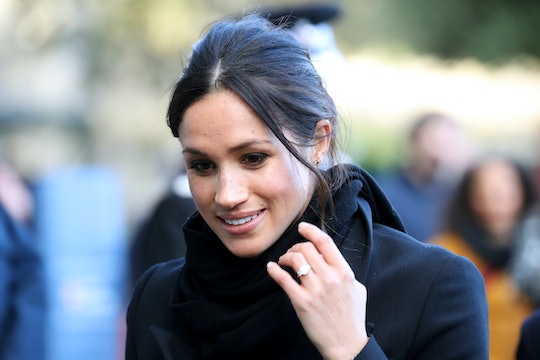 Meghan Markle's Sparkly "Push Present" Might Have Been Revealed

From her marriage to her one-year anniversary to the birth of her first child, the Duchess of Sussex makes international news pretty much every day right now, whether she even does or says anything new or not. Well, it turns out that jewelry may speak louder than words, since it's being reported that Meghan Markle's engagement ring got a redesign, and she didn't even need to talk to the press for everyone to still take note.

As Page Six reported, the change in Markle's gorgeous engagement sparkler really caught fans' attention when she showed up for Trooping the Colour in London — the big, parade-filled celebration of the Queen's birthday that the monarchy puts on every year, as Romper has previously reported.

Markle, there without baby Archie at least as far as anyone could see, brandished a gorgeous diamond eternity band that made her yellow-gold engagement rock from Prince Harry look a little different, as Town & Country magazine reported. The report, naturally, assumed that the changes to her ring's old setting reflect the addition of a "push present" from Harry to Meghan, which totally makes sense.

Interestingly, the "upgrade" to the ring is almost more low-key than the original. The three-stone diamond, which used to connect to a simple gold band, seems to have been swapped for a diamond pavé band and the addition of two more ultra-thin bands. One appears to be yellow-gold and the other appearing to be an eternity band with diamonds.

It seems to me that the two simple-but-stunning additional bands could also be attached and be one new piece total, given that we only have distant photographic evidence to ogle. Either way, T&C added that Markle's taste in jewelry is known to be dainty as opposed to overstated.

Prince Harry excitedly revealed the original ring's origins in a BBC interview after popping the question, as Page Six reported in another story.

“The ring is yellow gold, because that’s [Markle’s] favorite, and the main stone itself I sourced from Botswana, and the little diamonds either side are from my mother’s jewelry collection to make sure that she’s with us on this — on this crazy journey together,” the royal told the news channel in 2017.

Aww. It's so touching that Meghan's ring, both versions, include reference to Princess Diana. Not to mention a stone from Botswana, where as Page Six noted, Harry and Meghan took a romantic camping trip early in their relationship.

T & C reported the new eternity band was reportedly crafted by the Queen's personal jeweler, Harry Collins, but there is no word regarding the additions or changes to the ring — like who might have been responsible.

The magazine added that the prince worked with jewelers Cleave and Company on the original ring, so it would make sense that company might have been involved in some way with the duchess' jewelry upgrade.

I like reading positive news about this duo, who have also just kicked off their dedicated charity foundation. And whether or not your spouse is in a position to give a "push gift" — having three babies, I got a gorgeous necklace one time, absolutely nothing another birth when times were tight and finally, on Baby 3, the gift a mom really needs: an espresso machine — I appreciate the love and excitement the Sussexes bring to their new life together. Plus, it's always fun to ogle jewelry this sparkly.