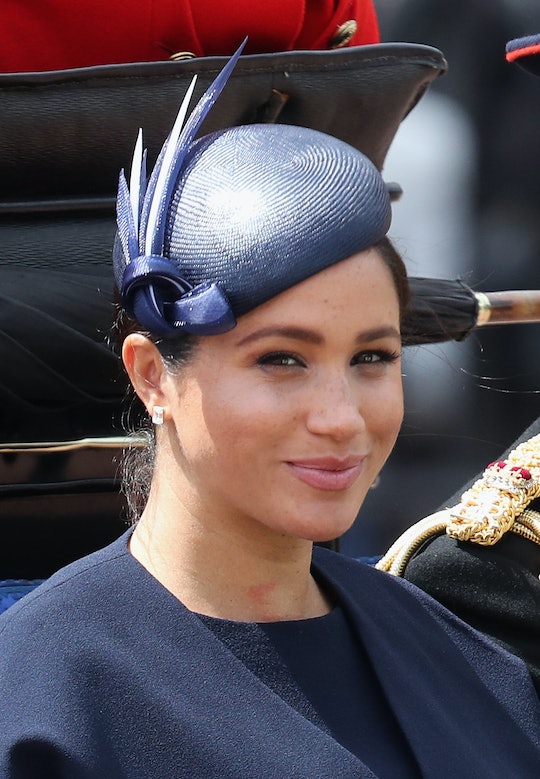 After taking some much-needed, much-deserved time off of her royal duties to spend time with her son, the Duchess of Sussex Meghan Markle is back in the news. Most recently, she appeared at the Queen's official, parade-worthy birthday celebration, Trooping the Colour, over the weekend. And now we know where Meghan Markle's next public appearance will be, and the reason why is proof motherhood won't stop her from being an awesome BFF.

As Us Weekly detailed exclusively, the new mom — who gave birth to baby Archie, her first child with the Duke of Sussex, Prince Harry — in May, will be present on public duty for at least one day of the Wimbledon season, the world's oldest tennis event that takes place yearly in England.

This year's festivities kick off Friday, June 28, with the main portion of the competition starting July 1, Us Weekly noted. The publication stated that the Duchess of Sussex had a hard time leaving her son even for a little bit, but wanted to be at the national celebration of Queen Elizabeth to offer her support.

Country Living magazine noted this show's the importance of the annual Trooping the Colour event, which this year boasted 1,400 soldiers, 400 musicians, and nearly 300 horses as part of the celebration around the Queen's 93rd year.

So it's interesting that Markle even has another date away from home on her calendar. As Yahoo! News reported, a royal source confirmed the Duchess is “still on maternity leave and will be for the rest of the summer.”

Why bother attending what is sure to be a crowded tennis match in the sun, then? I'm thinking one of the answers to that question has to do with friendship. Specifically, Markle's long-term connection with tennis-star-of-all-tennis-stars, Serena Williams.

Last year, Markle not only showed up at the famed green to cheer her BFF on, she also brought along sister-in-law Kate Middleton, who was still on leave after the birth of Prince Louis, Harper's Bazaar reported.

The publication noted in a separate story that in Williams' concession speech, the sports legend thanked the moms out there for understanding her desire to return to champion status after having daughter Olympia.... a speech that brought Markle to tears.

This year, Williams, having suffered a defeat at the French Open, is injured, making the extent of her full participation in the event uncertain, as London's Independent newspaper noted.

Still, Williams is a seven-time Wimbledon champ, and she's set to be there in some form. So I just know this is why Markle's not going to miss it... even if it's difficult for her to leave her newborn for a bit.

When it comes to her close friends, Markle seems to have her priorities in order, having kept the connections that she had before her royal marriage, including Williams and Priyanka Chopra.

In fact, many Instagram fans thought that Williams' post last month from an unnamed but suspiciously gilded Palace-y looking room (at the same time the star was in Europe) could only mean Williams was getting to meet Meghan's baby for the first time.

Sure, watching a famed tennis star is sure to be an incredible experience, but it's clear Duchess will be attending Wimbledon for more than just the back-and-forth tennis action. She's there to cheer on a friend and fellow mom, and honestly, how awesome is that? More women supporting women, please!