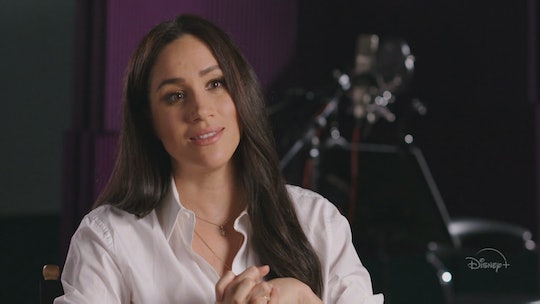 The royal family is known for its elegant and understated style, and it looks like the Duchess of Sussex is carrying that little fashion tip with her to life outside of the royal bubble. In fact, a necklace Meghan Markle wore in a recently aired interview appears to be a subtle, yet sweet nod to her husband Prince Harry and son Archie.

Markle was spotted wearing the meaningful jewelry during an interview with Good Morning America about her work on the new Disney+ documentary, Elephant, wherein she narrates a look into the lives of the "majestic creatures," as she called them. And, as Hello! Magazine reported, her fans were quick to notice the meaning behind her jewelry.

In the interview with Good Morning America, Markle can be seen wearing a surprisingly affordable Vanessa Coin Zodiac necklace with a Taurus charm from Suetables, which retails at just $39, along with a longer gold chain and a personalized gold Shirley horoscope pendant with a Virgo star sign. Prince Harry, who was born on Sept. 15, 1984, is a Virgo and Archie, whose birthday is May 6, is a little Taurus, so it looks like her jewelry was a clear nod to her sweet family.

This actually isn't the first time that Markle has used her jewelry to reference her loved ones. She wore the same necklaces back in her appearance at the Broom Farm Community Center and in September, she wore a dog tag necklace with Prince Harry and Archie's initials to the U.S. Open Final.

Rather than talk her personal style, however, Markle used her time on screen in the interview to discuss the elephants and the importance of protecting them. "We see in this film just how remarkable they are —their memories are amazing, the close connection of the heard, their protectiveness of their young. I think they're a lot more like us than they are different," she told Good Morning America.

Now that their lives as senior royals is over, Markle and Prince Harry are free to pursue jobs that were out of their reach while acting as Duke and Duchess of Sussex. For Markle, that appears to mean a return to her acting roots. Before marrying Prince Harry, she had a flourishing acting career that included a regular role on the legal drama Suits. The narration for Disney's Elephant is the first of Markle's roles in show business since leaving royal life, but will surely not be her last.

Even while living out her passion for performing, Markle always has Prince Harry and baby Archie close to her heart — literally, when it comes to these two necklaces — and the tribute is a touching reminder of where her priorities lie.