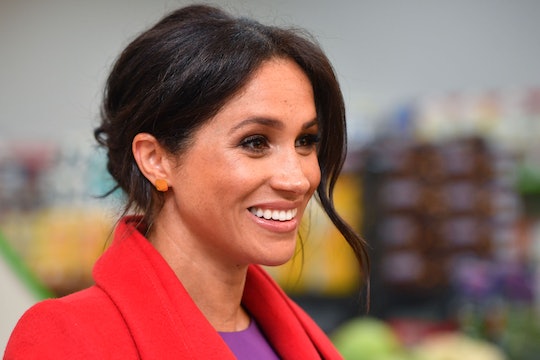 Poor Meghan Markle has been getting a bit of bad press in recent months, and I think I know why. After the British tabloids seemed to enjoy having a bit of a breath of fresh, American air in the royal family, I strongly suspect they've gone off the idea of change. Either that or it just gets boring saying only nice things about someone all the time, whatever. Either way, the pregnant Duchess of Sussex has been labeled something of a trendsetter, like it or not. And it looks as though Meghan Markle's nursery will reportedly be something of an ode to her laidback, earthy California background. Because she's a modern woman with her own taste, which I personally think it pretty terrific.

Markle and her husband Prince Harry essentially owned all of 2018, thanks to their engagement, their gorgeous May wedding at St. George's Chapel at Windsor Castle, then the announcement that they were expecting a baby in the spring (perhaps even as soon as March, as reported by Town & Country). Now the couple are getting set to move into their new home on the grounds of Windsor Castle in the Berkshires, Frogmore Cottage, once renovations have been concluded. And part of those renovations?

A new nursery, of course.

Frogmore Cottage is a historic old home that was built in the time of Queen Charlotte in 1801. It's a beautiful 10-bedroom estate that essentially looks like every dream we've ever had about living in a Jane Austen novel, which both Meghan Markle and Prince Harry are clearly pretty happy about since they're moving in the coming weeks, according to Harper's Bazaar.

But that doesn't mean Markle isn't going to modernize it, especially with some seriously Californian and personal touches... like eco-friendly vegan paint. A royal insider reported told The Daily Express that Markle has chosen to paint the nursery using rosemary and eucalyptus oil-infused vegan paint. "Meghan has been looking long and hard at paints for the Sussex nursery. Rather than opt for fashionable Farrow and Ball paint in favoured shades such as Wevet, Peignoir and Pavilion Grey and Salmon, the Sussexes are much in favor of The Organic & Natural Paint Co’s Auro range for the nursery," they reportedly told The Daily Express.

This certainly sounds like an evolved choice for a new parent, especially when you consider how the The Organic and Natural Paint Co. describes its vegan paint on its website: "Natural, eco friendly, safe and non toxic paints for your home. No more chemicals leaching into the air your family breathe for a cleaner & safer home."

Markle is a vegan five days a week as well, as per Plant-Based News, and a noted animal lover on top of that, so it's perhaps not terribly surprising that she would choose a vegan paint.

The Duke and Duchess of Sussex are also reportedly decorating the nursery for the newest little prince or princess in a gender neutral way, according to Marie Claire, which either means they've chosen not to find out the sex of the baby or they are just fond of neutrals, perhaps.

I don't want to cause an international incident by insinuating that Californians are more eco-friendly than Brits, of course... I'm just saying that painting a nursery in a home once owned by Queen Charlotte with vegan paint seems very on trend for Markle.

Which, by the way, is a very good thing.