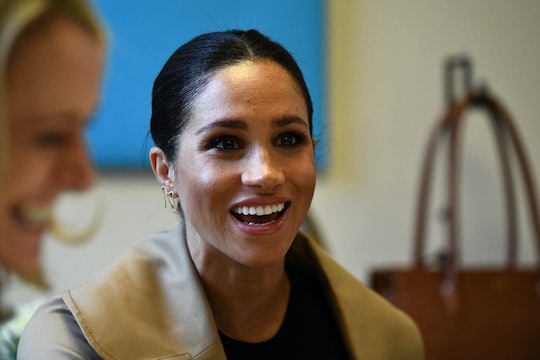 Meghan Markle has had perhaps one of the most emotionally charged years of anyone on the planet in 2018. First off, I don't know if you heard but she married a for real Prince Charming. Who made it abundantly clear that he considered himself the luckiest man on the planet, and who doesn't love that. She also became a member of the British monarchy, and while I'm sure there have been some amazing elements, the lack of privacy (in the media especially) must have felt like a mixed bag of tricks. Fortunately, Meghan Markle's policy on dealing with "drama" should see her well sorted as she moves forward. Which is good news, because nobody, especially a woman who is expecting a baby in the spring, should have to deal with the ridiculous amount of drama she's suffered through.

The former Suits actress was interviewed by In Style magazine back in 2015 about her policy on office politics. Of course this was in 2015, a full three years before she was to become the Duchess of Sussex and the most Googled person in 2018. Before the media, both in the UK and in the United States, would spend hundreds of thousands of words speculating on every relationship in her life, good or bad.

And yet it appears she already had the tools to deal with the drama and live her happiest life.

As Markle told In Style in 2015 about dealing with drama, as per People:

In life, in the office, in any of that, stay out of the drama. You’ll be endlessly happier for it. If you want to do that, save that for drinks after work with your girlfriends. But I would say don’t get involved in the inner-office politics.

Not only is this excellent advice for the majority of people out there, it's also especially prescient for Markle herself. In recent months she has been plagued with frequent rumors that she is warring with her sister-in-law, Kate Middleton, with absolutely no foundation in verifiable fact other than anonymous palace "sources." Neither Markle nor Middleton, nor their husbands Prince Harry or Prince William, in fact, have bothered to dignify the rumors with a response.

Then there's Markle's family, or more to the point her endlessly inflammatory half-sister Samantha Markle. The Duchess of Sussex seems to be taking her own advice about steering clear of drama by refusing to be drawn into a litany of accusations by her sibling. Which makes me respect her even more.

Markle is busy with her new life as a royal. Just this past week she announced her four new patronages to charities that clearly mean a lot to her. She and Prince Harry are getting ready for their move into Frogmore Cottage. And the couple are also expecting their first baby in mere months.

In other words, Markle's life is pretty remarkable these days. And she is choosing to rise above the drama that would surely cause a lesser mortal copious amounts of stress.