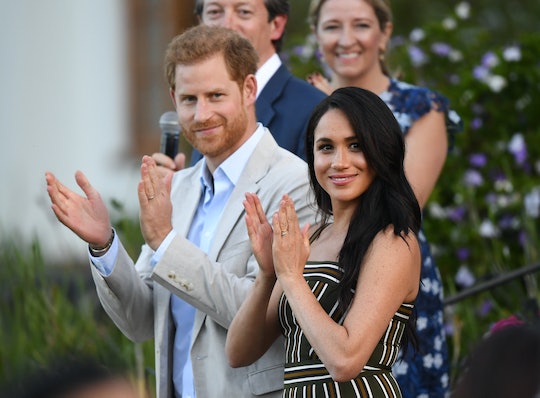 The littlest royal and his parents may be in Africa on official business, but it's only natural that the topic of their life as new parents should come up from time to time. During an event on Tuesday, the couple opened up about parenting and Meghan Markle talked about Prince Harry as a dad to their son Archie and, of course, he had the sweetest response.

Prince Harry and Markle attended and participated in a group mindfulness activity on Tuesday, hosted by the nonprofit Waves for Change — a nonprofit organization that connects local surfers with young people in need of mental health services — on a beach in South Africa, according to Entertainment Tonight. One phase of the event was a "power hand" session that prompted participants to identify and meditate on their strengths.

When a coach suggested that Markle's strength was dancing — referencing the dance session she and Prince Harry had upon arriving in the country on Monday — Markle chose a different strength. "She laughed and said, ‘Not that,'" Ash Heese, a manager for Waves for Change, told People. "She said parenting is the new strength that she and Harry are learning."

In case you somehow missed the exciting news, Markle and Prince Harry share an adorable almost-5-month-old little boy named Archie, who they brought along on their family tour around Africa. While the proud parents didn't bring Archie along on their outings on Monday and Tuesday, he was a hot topic of conversation, of course.

For instance, when a fan asked where the little prince was, Prince Harry said that he was "sleeping," according to Harper's Bazaar. Prince Harry also added that Archie was "exhausted" from their travels but enjoyed looking out the window on the plane ride there from the United Kingdom. The likes of Prince Harry and Markle are probably above complaining, but I would wager — as a parent who has taken quite a few international trips with a baby — that mom and dad were pretty exhausted, too. But that didn't stop them from participating in all kinds of exciting and meaningful work in the early days of their visit.

Even before Archie was born, Markle was predicting Prince Harry's paternal success. As Entertainment Tonight Canada reported, she did just that back in February at the Endeavor Awards; she was reportedly overheard telling a guest that "He's going to be the best dad."

Markle and Prince Harry have been vocal about their joy over becoming parents from the beginning. Shortly after the birth, Prince Harry told reporters at a photo op how happy he was that Archie was in the world. “Parenting is amazing," he said, according to USA Today. "It’s only been what, two and a half days, three days, but we’re just so thrilled to have our own little bundle of joy. We have to spend some precious time with him as he slowly starts to grow up.”

When Markle was asked at the photo call what motherhood was like, she once again took the opportunity to sing Prince Harry's praises while gushing over Archie. "It’s magic. It’s pretty amazing. And I have the two best guys in the world so I’m really happy," she said, according to Elle.

So, to sum it all up, Prince Harry and Meghan Markle are still in the midst of their African tour and in between supporting important causes, they are also supporting each other. That two-way support system seems to be their thing as parents, and it really doesn't get any more perfect than that.