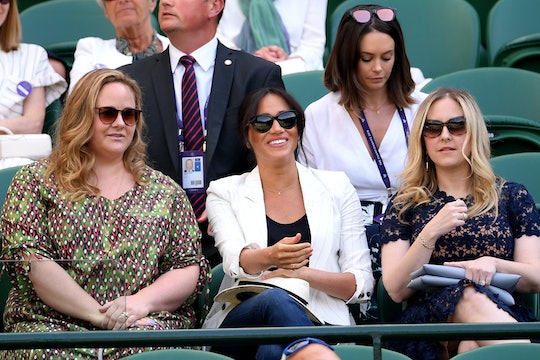 As someone who writes about the royal family on the regular, I feel perfectly justified in saying that Meghan Markle just simply cannot win. Like ever. It doesn't seem to matter what she does or doesn't do, says or doesn't say, people are always going to come for her. The latest big issue? Apparently Meghan Markle's reported requests for privacy at a tennis match have people all fired up, because how dare she ever think she's allowed to enjoy a brief moment to herself?

On Thursday, the Duchess of Sussex surprised tennis fans when she showed up at Wimbledon to watch her friend Serena Williams play against Kaja Juvan of Slovenia, according to People. You would think that royal watchers would be excited by Markle's appearance, especially since her public outings have been dramatically scaled back since the birth of her first child, Archie Harrison Mountbatten-Windsor, with husband Prince Harry on May 6. But apparently not.

Instead of focusing on the fact that Markle looked relaxed and happy watching the match with two of her friends, the big issue appears to be that her security detail allegedly tried to protect her privacy. According to a report from The Telegraph, Markle's security allegedly asked people, including reporters, not to take pictures of her at Wimbledon as she was there in a personal capacity. And I guess this didn't go over too well.

So the issue some fans are bringing up on social media is the fact that Meghan Markle is now a member of the British monarchy and as such is a public official. Controversial Good Morning Britain commentator Piers Morgan even went so far as to suggest Markle should "go back to America" because of her alleged request for a little privacy, according to The Sun.

On Twitter, he wrote: "It’s absurd for Ms Markle to demand privacy as she sits in the royal box on a publicly-funded jolly with her mates..."

Sadly other fans seemed to feel Markle's possible request for privacy was too much as well.

It feels important to note that Markle was simply at Wimbledon to watch her friend play tennis, and that perhaps one of the reasons she might have been asking people to avoid photos could have been because she was there with two friends from her years at Northwestern University, according to People. Neither of whom are members of the British royal family, and perhaps they didn't want their pictures taken either.

The reported photo request wasn't the only complaint people had about Markle's Wimbledon appearance. According to Cosmopolitan, people were also angry that she wore jeans (which is apparently some kind of faux pas when you want to sit in the royal box at Wimbledon) and she also left before British tennis star Andy Murray's match. A source told The Daily Express, "Andy Murray was on Court 1 afterwards and it was a massive faux pas not to watch a Brit when she is signed up to the Royal Family."

This sort of petty commentary reminds me of Markle's pregnancy, when she was genuinely mocked in the British news like in one article for... touching her baby bump. Seriously.

Meghan Markle isn't the first royal to suffer through massive public scrutiny in the press, but the real difference with her seems to be that it doesn't matter what she does, she is criticized. If she is in the public eye too often she is hogging the spotlight, if she retreats she isn't pulling her weight. If she dresses up in jewels she is wasting the taxpayers' money. If she wears jeans she is disrespectful.

Fortunately, I have a feeling Markle doesn't read much of what is written about her. Which is probably exactly why she looks so happy all the time.