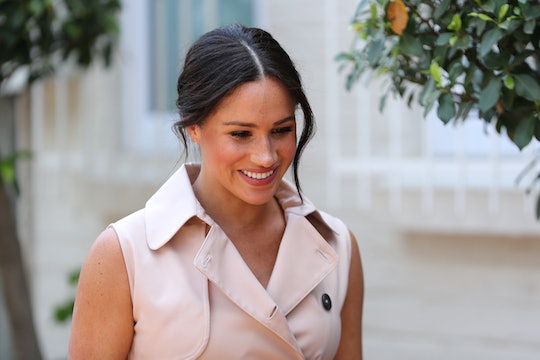 Meghan Markle has spent the past two years trying to do two things simultaneously: become a member of the royal family while also remaining true to who she is at her core. It's no easy feat, particularly when she has the British tabloids ready to pounce on every single move she makes at every turn. While I'm sure it hasn't always been easy, Markle seems to have really come into her own in recent months. Seems to have figured out how to be a royal, but do it her own way. Which is why Markle's response to a curtsy at a recent event was so uniquely her. Warm and sweet and ready to be a duchess but also be herself.

The Duchess of Sussex was at the Royal Albert Hall in London on Tuesday for the opening ceremony of the One Young World Summit. She was on hand in her capacity as the Vice President of the Queen's Commonwealth Trust and Counsellor to the 2,000 young leaders from 190 countries around the world. As Markle made her way onto the stage, she was greeted by One Young World co-founder Kate Robertson who automatically dipped into a curtsy. As one does for a member of the royal family, of course.

But Markle wasn't having it. Instead, she pulled Robertson into a big, warm hug.

This felt like a real moment for the Duchess of Sussex. A moment on stage when Markle confidently chose to embrace not only Robertson — who she has known as a friend for the past five years, according to Vanity Fair — but also honor the person she is beneath the royal veneer.

Some people have taken to social media to criticize Markle for not following the rules of British royalty, of course. Others have made Markle's choice to embrace a friend rather than accept her curtsy as a nod to her American heritage, which seems equally false. (I'm fairly certain British people also hug each other.) Instead I see this moment as particularly prescient after the release of ITV's documentary, Harry & Meghan: An African Journey. A documentary that saw both Markle and her husband of one year Prince Harry open up about their difficult lives in the public eye and how they both hope to carve their own paths for their future and that of their baby boy Archie.

Markle, in particular, opened up to ITV's Tom Bradby about trying to deal with all of the negative press coverage she has received, and how she wants to "thrive" instead of simply "surviving."

To me, this moment on stage was Markle thriving. Even as Robertson sort of awkwardly had to move out of her half-curtsy and into Markle's embrace, she simply stood with her arms open and welcomed her. Perhaps it helped that the One Young World charity is a blast from the past for her, an organization she supported in her former life as an America actress. She first became a Counsellor for this charity back in 2014 at the Summit in Dublin, Ireland, so she was clearly in her comfort zone.

Or perhaps Meghan Markle has made the powerful decision to honor herself as a woman, a wife, a mother, and a friend over an antiquated system of royal rules. Perhaps this is her way of showing the world she is comfortable with who she is, no matter what anyone says.