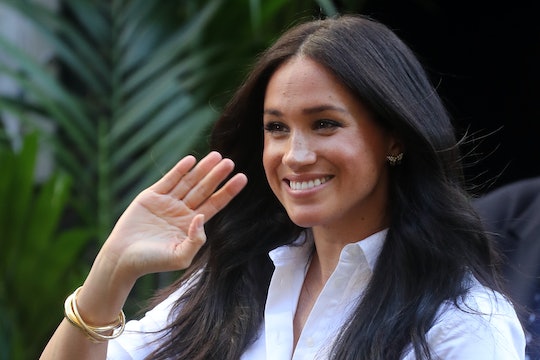 Meghan Markle Has Officially Made Her Return From Maternity Leave

Meghan Markle has been enjoying a summer with her new baby boy Archie. She and her husband Prince Harry have presumably been nestled together at their new home at Frogmore Cottage on the grounds of Windsor Castle, learning how to be parents together and getting into a new routine. While she will still have the opportunity to do exactly that, Meghan Markle has returned from maternity leave to pick up her royal duties and her work is all about celebrating a woman's drive and ambition in the workplace. Because it turns out you are allowed to be both of those things at once... who knew?

The Duchess of Sussex gave birth to her first child, Master Archie Harrison Mountbatten-Windsor, on May 6, 2019. Since then, she and her husband the Duke of Sussex have tried to maintain a little privacy with their baby boy, which means royal watchers haven't seen a whole lot of Markle over the past few months. A few odd sightings, like when she flew to New York over the weekend to watch her good friend Serena Williams play in the U.S. Open. But otherwise she has stayed under the radar with her baby boy.

That does not mean, however, that she hasn't been busy. And on Thursday, she ended her maternity leave with her first official outing to show the world exactly what she's been working on over the past few months.

On Thursday Markle launched her capsule collection of women's clothing for Smart Works, an organization helping women find careers by offering employment coaching tips and career-ready clothing for interviews. Smart Works is one of the charities Markle chose as a patronage, and she decided that one of the best ways to support Smart Works was to design a capsule collection of shirts, trousers, dresses, blazers, and tote bags, and have the proceeds benefit women who would need those items.

For every item of her capsule collection sold, which she designed with the help of British retailers like Marks & Spencer and Jigsaw, that same item will be donated to Smart Works for a woman trying to find a new career. The sale coincides with the opening of London Fashion Week, and is expected to last for at least two weeks, according to People.

As Markle explained in a statement on the Sussex Royal Instagram page, "Since moving to the UK, it has been deeply important to me to meet with communities and organisations on the ground doing meaningful work and to try to do whatever I can to help them amplify their impact."

Markle has been incredibly focused on trying to effect change since becoming a member of the royal family. She worked with survivors of the Grenfell Tower fire to create Together: Our Community Cookbook in an effort to raise funds to restore their community kitchen. And in September Markle was the guest editor for British Vogue, where she used her platform to highlight women who were "forces for change."

Clearly this woman has plans for what she wants to do now that her maternity leave is over. And all we can truly say is, welcome back.