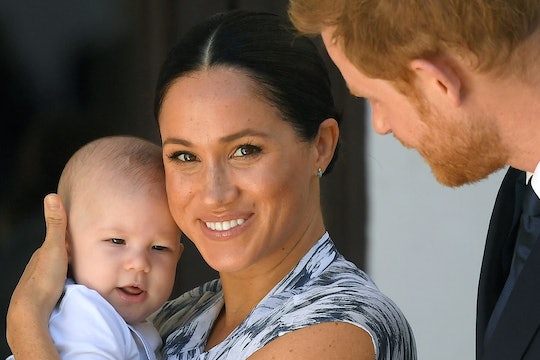 Meghan Markle Took Archie To His First Baby Playgroup & Yep, He Had A Blast

Meghan Markle and Prince Harry might be members of the royal family, but it doesn't mean they can't live so-called normal lives. And as such, they want to raise their little boy like they're private citizens, despite the fact that he's the great-grandson of Queen Elizabeth and will presumably be grandson of the king himself one of these days. Sure, little Archie will have loads of opportunities most of us can barely imagine. But for right now, his parents are trying to set up some regular people routines. One example? Meghan Markle's son Archie goes to a baby playgroup, and it simply just does not get more normal than that, folks.

Markle and Prince Harry were at the WellChild Awards on Tuesday to honor gravely ill children and their caregivers with a ceremony and celebration. Prince Harry has been patron of the WellChild Awards since 2007, and the couple also used the public donations that came in from royal well-wishers to support this charity, in addition to three others.

The Duke and Duchess of Sussex spent time meeting with honorees at the event, and (as almost always happens with parents of new babies), the topic of their 5-month-old son, Archie Harrison Mountbatten-Windsor, came up in conversation.

As Hello! reported, the topic came up while the couple were talking to 11-year-old WellChild Award recipient Milly Sutherland and her mom, Angela, during a reception for the awards at the Royal Lancaster hotel in central London, according to Harper's Bazaar. The mother and daughter asked the Duke and Duchess of Sussex about baby Archie (probably disappointed he wasn't there — I know I would have been), with Meghan Markle explaining that little Archie was busy doing his own thing, having a blast at play group with some other babies.

"She took him to one of these baby classes today and she said they had loads of fun together," Angela reported Markle saying, according to ELLE. "She said it was really good fun."

Doesn't that sound like the most wondrously normal, mundane thing? The kind of thing the rest of us might take for granted, but for royals like Markle and Prince Harry, it must feel refreshingly regular. Much like when they took Archie out for a casual dinner at a local pub near their home in Windsor at Frogmore Cottage last month, as per TMZ. Finding that sense of normalcy for their little boy is also apparently the reason why Archie doesn't have a royal title, as royal expert Angela Mollard told the podcast Royals, according to The Sun. They want him to have the chance to be a regular kid.

A regular kid with red hair like his dad, apparently. Young Milly Sutherland told Hello! that she asked the Duke and Duchess of Sussex if their little boy's hair is red, and they confirmed he's a sweet baby ginger. Although he doesn't have much, to be honest, but don't worry — like every other mom, Markle is comparing her baby to the other babies at playgroup to double-check his lack of hair is fine.

"Meghan said he has and Harry said he definitely is, you can see it in his eyebrows," they added. "Harry said he’d had no hair for five months, but Meghan told him she had taken him to the playgroup and she said there were other children there with the same amount of hair or even less."

I'm sure there are plenty of people who think it's a bit rich for Meghan Markle and Prince Harry to want a normal upbringing for their son. But guess what? Just because they're royals doesn't mean they can't hang at a play group. So there.