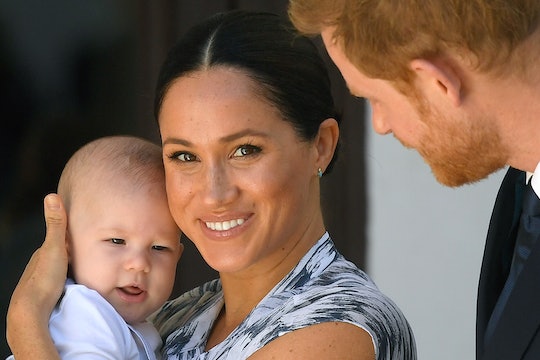 In the midst of the many life changes coming up on the Duke and Duchess of Sussex, the littlest royal is trying something new himself. At just 10 months old, Meghan Markle's son Archie is apparently trying to walk already. While Markle and Prince Harry have made their final round of official royal visits in the UK, Archie stayed back in Canada with friends and family, presumably working on his walking. But the proud mom couldn't resist the opportunity to brag on him a little during an event.

Markle was visiting with a group of women at a school on Friday for International Women's Day, she reportedly engaged in a conversation with 66-year-old Geraldine Dear, one of the original "Dagenham Girls" who campaigned for equal pay for women at the Ford car factory in Essex, according to the Daily Express. Along with the scheduled talking points, Markle reportedly opened up about some more personal topics. Speaking with the Daily Mail, Dear shared that Markle talked with her about little Archie.

"I just had to ask her about the baby," Dear told the Daily Mail. "She said to me, 'He’s exactly ten months today and he’s started trying to walk.'" Most babies take their first steps between nine and 12 months, according to BabyCenter, so it sounds like Archie is right on track.

Archie certainly wasn't the only topic of conversation during Markle's visit to Dagenham. She also expressed her respect for the women there on an Instagram post on the Sussex Royal Instagram account, sharing a few of photos from the day.

“Being in Dagenham is incredibly profound," the post reads. "Because as you can see with Geraldine and the other women who had the strength to really stand up for something that they knew needed to be done. This is the best example of no matter how small you might feel, how low you may feel on the ladder or the totem pole, no matter what color you are, no matter what gender you are, you have a voice, and you certainly have the right to speak up for what is right."

Markle's last bit of official royal business covered a lot of important topics, not least of which was a nice little update on baby Archie who has been largely out of the limelight lately. But fans of the royal family can rest assured that Archie is thriving and well on his way to taking steps all on his own.