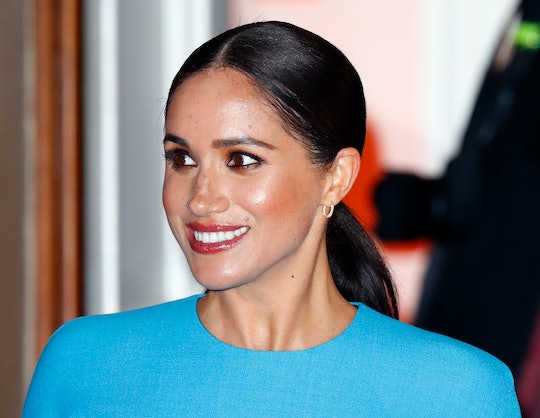 After a long break from royal duties in Canada, the Duchess of Sussex returned to the United Kingdom for a little business. And not only did she look radiant and happy at an official event on Thursday evening, Meghan Markle also shared an update about little Archie.

Markle and Prince Harry attended the Endeavour Fund Awards together on Thursday night, celebrating service men and women who have been injured in the line of duty and have gone on to challenge themselves and persevere. It was an exciting night, with an impromptu proposal onstage from one of the servicemen (Markle was seen cheering them on and getting a little excited), and Prince Harry gave a speech promising he would always "serve Queen and country."

Perhaps best of all, however, was a moment when Markle gave a much longed-for update on her son Archie. He might not have been at the event with his parents, but he was not far from his mother's mind. Markle reportedly had a conversation with Claire Spencer, one of the Endeavour Fund Awards nominees, who told Hello! Magazine that she was treated to an update about a very busy Archie. As she explained to the publication, "[Markle] said 'oh yes, well he is 10 months now and is into everything.'"

Archie appears to be right on track with his 10-month-old peers. Generally speaking, babies at this age might be pulling themselves up from sitting down to standing, moving around holding onto furniture, and will be starting to figure out how to put smaller objects into larger ones. So basically, they're just a whole lot busier and, as Markle said, "into everything."

While both Markle and Prince Harry don't often open up about their baby boy, they have shared a few bits of information about little Archie. Back in November, for instance, Markle and Prince Harry were visiting a group of military families and the proud mom told them that Archie had two new teeth. At the same event, Markle also spoke to fellow moms about going through the weaning process with her baby boy and said he had entered the crawling stage.

The couple reportedly left Archie back in Canada for their short visit to the United Kingdom to wrap up the last of their official duties as senior members of the royal family, according to Harper's Bazaar. Considering how busy a 10-month-old baby tends to be, perhaps they'll be able to enjoy a little break together. Because once he starts walking... all bets are off.