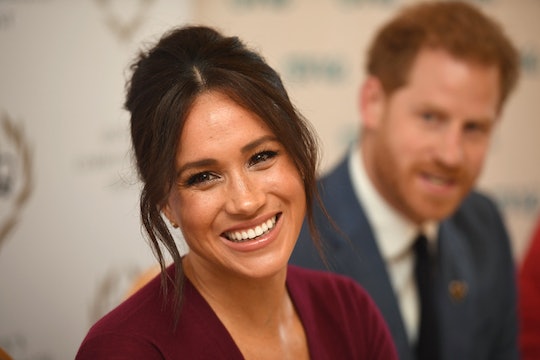 Meghan Markle's Bakery Visit Was All About Supporting Women

The art of baking is a powerful thing. If you've ever struggled with loss or difficulty of any sort, I can tell you that spending time in the kitchen and creating some sort of delicious baked good is incredibly therapeutic. As is spending time with other women who might understand a little something about what you're going through. Meghan Markle clearly understands this as a woman who supports other women and also a serious foodie. Markle's visit to a bakery on Thursday was special for several reasons, not least of which as a gesture of support for women who truly need it right now.

On Thursday the Duchess of Sussex dropped by to support a new location for the Luminary Bakery in London, England. This bakery is especially dear to Markle's heart not simply because their treats are presumably delicious, but also because of the wonderful way it supports economically disadvantaged women. Luminary Bakery, as per its website, uses "baking as a tool to take women on a journey to employability and entrepreneurship, equipping them with transferrable skills for the working world. We offer courses, work experience and paid employment within our bakery, empowering women to build their career." As a staunch feminist who has made lifting women up her prime focus as a member of the royal family, it's no wonder Markle stopped in to show her support at the bakery's new location in east London.

Markle shared special moments from her visit on the official royal Instagram page she shares with her husband Prince Harry with a caption that read in part:

It was a special moment to acknowledge the spirit of Luminary and their remarkable business model that opens its arms to women from vulnerable circumstances (be it abuse, poverty, trafficking, marginalisation) and equips them with the job skills and confidence to succeed.

The new mom is a longtime supporter of Luminary Bakery. When she was the guest editor for the September issue of British Vogue she personally made the decision to include the business in her "Forces For Change" list. She wrote a letter to Luminary Bakery at the time explaining why she felt it so important to include them, as per the company Instagram, saying:

When I knew I would be secretly guest editing the September issue of British Vogue, including Luminary Bakery was a non-negotiable. The work you do, what you represent to the community, the spirit of the women there—you all embody what it means to be 'forces for change.' Thank you for being a part of this special project.

In return for Markle's unwavering public support, Luminary Bakery reportedly made her a birthday cake in August, as per Town and Country.

Meghan Markle has offered consistent support of businesses that help disadvantaged women like Luminary Bakery ever since she became the Duchess of Sussex. She has made no secret of the fact that women's issues are at the top of her philanthropic list, whether she's creating a cookbook with women survivors of the Grenfell Tower fire or designing clothes in support of Smart Works, a charity that helps vulnerable women find a career, Markle knows how to make a difference.

And I suspect the women working in the kitchen at Luminary Bakery felt buoyed by her presence. That's all that matters.