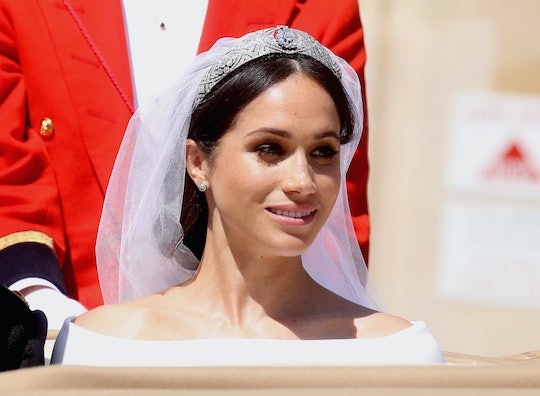 The British tabloids are mad at Meghan Markle again, I guess. Word on the street seems to be she's something of an elitist, supposedly spending too much money on the finer things and losing touch with so-called regular people. I suspect this chatter isn't even a little true, and I might even have some evidence that the Duchess of Sussex is a regular gal. Want the proof? Apparently, Meghan Markle's wedding makeup was inspired by Pinterest (according to her makeup artist) which means she is exactly like every woman getting ready for a big event ever.

As the world now knows, Meghan Markle was an American actress and was a lifestyle blogger when she met Prince Harry in 2017. The couple fell in love and were married at St. George's Chapel at Windsor Castle in May 2018, where every tiny detail of their wedding was either raved about or panned, depending on the media outlet. Which means Markle must have been feeling at least a little pressure to pull off some perfect makeup for her wedding day. About 29.2 million people from around the world tuned in to watch the ceremony, after all.

Markle's longtime friend and makeup artist, Daniel Martin, took to the Gloss Angeles podcast TK to spill the beans on what it was like to do the Duchess of Sussex's makeup on her special day. Since the two couldn't actually get together for a dry run before the nuptials, they texted each other some of their favorite Pinterest looks ahead of time. He revealed, according to Us Weekly:

I didn’t have a makeup trial with her because we couldn’t make the time. I knew what she liked and didn’t like. We exchanged a Pinterest pictures over text. But I think for anybody, Pinterest is an incredible tool to use as a reference.

Of course, Markle is no stranger to heading to the internet for inspiration, especially since she curated a lifestyle site meant to inspire other women like herself. The Tig, which she closed down after getting engaged to Prince Harry in December 2017, as per Grazie, was a place for Markle to encourage women to get facials, take some alone time, and drink red wine, to name a few examples. But when it comes to wedding makeup, she turned to Pinterest for her look. As Martin told Gloss Angeles:

For a bride, that’s their red carpet moment. And I feel like you can’t stray too far from who you want to be and who you are because the last thing you want to do is look at these pictures and think, 'I was not comfortable looking like that.' You still have to have a sense of who you are.

Considering how much Markle's life has changed since becoming a member of the royal family, from moving overseas to giving up her career to becoming a mother for the first time to baby Archie in May, it's a good thing she held on to a sense of who she was before. Before she was the Duchess of Sussex, that is. And it's nice to know that once upon a time, she was just a woman scrolling through Pinterest, trying to find the perfect nude lip like the rest of the world.